For all of you who told me, "Oh when you find your wedding dress, you'll just know it's the one," I COMPLETELY disagree. I felt like I had it narrowed down to two dresses. Then I found a couple at another bridal store that I went to try on today before finalizing between the two I had previously picked just in case I like one of the one's I tried on today. And now I have 5 more on my list that could be "the one." Of all the wedding planning, this has definitely been the hardest thing to figure out. AND it's even harder because I get to go try on dresses by myself...I do better when I have opinions so I'm really struggling. Not to mention I'm running out of time so I need to get it ordered...oh...probably a week ago. :) My mom is coming to visit in two weeks so hopefully she will help me make my decision if I still don't have my decision made.
Posted by Mike and Kirsten at 12:35 PM 1 comment: 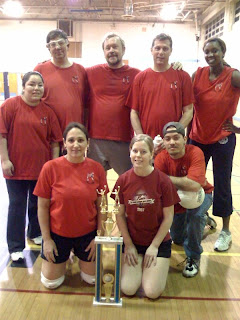 This weeked was quite an eventful weekend here in Maryland. On Friday night, I had volleyball. We made it to the semi-finals and won that game on Friday. Then we played in the finals right after that game on Friday and WON! We're #1!!! :) As I look at the picture above, I realize I am so pale...I need to get to tanning bed I think.

On Saturday, we took the dogs on a trail walk by historic Savage Mill which is close by where we live. The trail runs next to a river and about half way through the walk, we took the dogs down by the water so they could a drink of water. Stuart got really close to the water and THEN...he started to run into the water. If he wouldn't had been connected to leash so I could pull him back, I wonder how far he would have gone. :)

Last night I went to see Duplicity at a theater in Baltimore with Adena, Jig, and Tiffany. Adena is my Book and Cook Club organizer and Jig and Tiffany I just met last night. Then after the movie we went out to eat at an Italian restaurant called Della Notte. It was absolutely delicious!

Today, I'm taking the dogs to Dogtopia for a free dog gathering. Stuart's(for little dogs) was at 9:30 this morning. He did pretty good. He played a little bit(with the other 15 dogs there) but for the most part he stuck next to my side. After an hour, Stuart was more than ready to leave. He's already zonked out sleeping on the couch. Boulevard's(for big dogs) is at 12:30 and I know he will LOVE it. He probably won't want to leave.
Posted by Mike and Kirsten at 9:33 AM 2 comments:

I am finally closed on the sale of my house.
Enough said!!
Posted by Mike and Kirsten at 11:58 AM 4 comments:

Much better than yesterday

I'm not going to lie, yesterday was a really rough day for me...as in feeling homesick for my Nebraska peeps! This was really the first time since I've been here that I felt so homesick. I think it was the fantabulous weather(70 degrees yesterday, 77 degrees today) we had and I just kept imagining what I would be doing in Nebraska. So I thought maybe I would have gone on a run with Stacey, maybe I would have gone to the dog park with Jen, maybe I would have hung out with my family, maybe I would have been playing volleyball, and I KNOW I would have been sitting in a beer garden with either Jen, Kim, Stacey, Emilie(or maybe all of them) last night having a few adult beverages?! I have quite impecable timing because as Mike is about ready to leave for work last night at 4:30pm, I just burst into tears...poor guy! What guy wants to leave his sobbing fiance alone?! Well, actually probably quite a few men would like to do that but I like to think Mike isn't one of them. LOL! I basically felt sorry for myself the rest of the night. :)
So TODAY was much better than yesterday. First of all I slept in until about 10:30am. I'm quite amazed at how patient Stuart is in the morning. He sleeps in bed with us(I know, I know!) and he will lay there patiently until I get out of bed even though I can tell he is wide awake. Then I went WEDDING DRESS shopping! Woo woo! This is something that I've been putting off since I moved here. But low and behold I found four dresses that I love and I think I've now narrowed it down to two. YAY! Then I just got home from the gym(that always make me feel good) and now I'm chillin' in the living room with the puppies.
Anyway...much better day than yesterday! Miss everyone!
Posted by Mike and Kirsten at 5:20 PM 1 comment:

I've decided that I think I watch too much TV and I think it's causing me un-needed stress. I am addicted to The Bachelor. Last night was the 2 hour finale and the 1 hour 'after the final rose' show...Yes, I watched 3 hours of the Bachelor last night.
To summarize for all of you that don't watch the show: At the end of the 2 hour finale, Jason(the bachelor) picked Melissa and proposed to her on the show. The taping of the finale occurred about 6 weeks ago. Then the 'after the final rose' show is present day to check in on the happy couple. So, on national television, Jason breaks up with the Melissa(the girl he chose on the finale). Also on the 'after the rose' show, the rejected girl(Molly) comes on and gets to confront Jason and ask him question about why he chose Melissa, etc. So, to make matters worse for Melissa, Jason goes back to Molly and asks for a second chance. WHAT?! Not a very nice guy if you ask me.
All of this resulted in the following:
1. And men wonder why women act crazy sometimes...THEY do it to us. :) Ok, that's not really a fair statement but poor Melissa.
2. Mike was working last night and I was so worked up over the whole thing, I couldn't even fall asleep until super late.
3. I think I need to stop watching the Bachelor.
So...back to my original point. I think watching TV sometimes causes me un-needed stress. Hopefully the TV will remain in the 'off' position more often now.
Posted by Mike and Kirsten at 4:45 PM 2 comments:

That much snow is quite unusual for this area however I'm kind of excited for the excitement of snow...I get jealous when hear about all the snowfall in Nebraska. AND since I don't have to drive in it, I'm looking forward to the snowfall.
Since joining the Book Club, I've spent a good amount of time at the library.(well at least more time than I spent at the library in Lincoln) I decided I could save money by not buying the book we read each month and, instead, borrowing it from the library. Today when I was picking up our March book ('Running with Scissors' by Augusten Burroughs), I decided to browse the DVD section. Last summer, I borrowed season 1 of 'Sex and the City' from Kim...low and behold, the library has the series as well. Since Desperate Housewives(I pick some classy shows, don't I?) isn't on tonight and Mike is working, I figured I'd make some brownies and watch the first DVD of season 2...and try not to eat all the brownies...maybe drink a bottle of wine(er...glass of wine) to go with it. :)
Mike has started his regular schedule. He did end up getting the schedule he wanted...he works nights on Sat, Sun, Mon, and every other Tues. The good news for me is that I think volleyball will be switching to Monday in a couple weeks so the shift isn't as bad as I thought it was going to be for spending time with each other. He is on the Icon Protection division/station so his first night of work last night was spent at the Washington Monument. Tonight I believe he is at the Jefferson Memorial for the first half of his shift and on the Mall for the second half.
Posted by Mike and Kirsten at 6:13 PM 2 comments: