Happy birthday to Stuart! He turned 3 years old today!
(A few photos for your enjoyment) :) 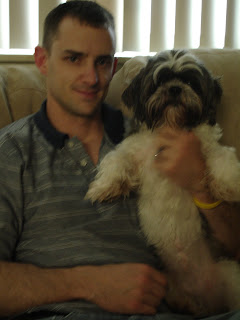 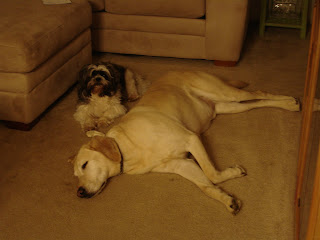 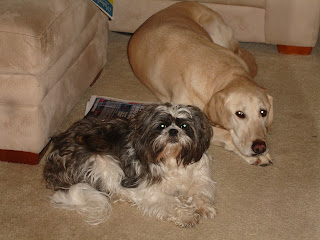 While I was at work today Mike went to the gym because tonight was 'Mike & Kirsten night.' We typically have one solid night a week that we dedicate to each other(no Poms coaching, no Overtime, no going out w/ friends, etc). Anyway, Mike got home from the gym and had lovely pink roses for me. When I asked, "Were the flowers for anything special?" He said, "Just 'cause you're THE BEST!" Aww...very sweet! Thirty seconds after he walked in the door and gave me the flowers, his phone rings. The phone call was from his work asking if he could work OT tonight from 8pm-3am. Like a proper husband, he says that he has to "talk to his wife" first and will call them back.

Hmmmm ~ How convenient that he brought me flowers on the exact same night he gets asked to work OT, which happens to be on 'Mike & Kirsten night.' Anyone else suspicious??

Just kidding ~ It was quite the coincidence but I will continue to believe he gave me the flowers because I'm "THE BEST!" :)
Posted by Mike and Kirsten at 3:04 PM No comments:

These are just things I've heard recently so why not give them a try, right??
It's not a secret that I'm approaching my 29th birthday, which makes me almost 30, so I'll try just about anything to help my skin and keep those wrinkles away. :)

In other news ~ pretty sure I'm not going to participate in a triathlon anytime soon. I got in the pool last week and it was basically a disaster. Oh well...I'll see if I can find some duathlon's(run, bike, run) this summer to try. I think I might even have Mike convinced to do a partner duathlon, in which I would do the running and he would do the biking. Check this out: http://www.warriordash.com/ If we're still here in October, I think we will be partaking in the warrior dash. :)

Hope everyone is having a great weekend!
Posted by Mike and Kirsten at 11:50 AM 2 comments:

summer has arrived in MD

Well it's been in the 70's/80's for the past week and a half so I'm declaring that summer has arrived. Some people are complaining that we went from winter to summer but I say, "Bring it on!" Go to the 90's or 100's if you must...I'm happy with HOT!!

The lovely weather has motivated me to start some running again...starting out slow though. I ran three miles yesterday and it went fairly well. There is a 5 mile race and a 9 mile race that I want to do in May so we'll see if I make it. I've also been contemplating(yes, only contemplating at this point) participating in a sprint triathlon race. Now don't let "sprint" fool you...this body does not "sprint" anywhere...but a sprint triathlon does mean shorter distances(.25 mile swim, 10 mile bike, and 2 mile run). The swim part is going to be the doozy for me. Hopefully I'll get in the pool this week and see how it goes.

Mike had his annual(or is it twice a year?)physical tests for his work tonight and apparently he did well. He has bad shin splints so he invested in some quite expensive custom made insoles and apparently that made the difference. After his run, he said he had no shin problems. Will my husband be my new running partner? Guess we'll see. :)

I'm coaching Poms for the nearby Boys & Girls Club again this year and we are in full force. The girls are adorable(I have the 4-6 year olds again this year) and it's so much fun to see them learn and grow. And they are so stinkin' cute in their tiny little uniforms! :)

Can't think of too much else to report...work is going well for both of us. Mike loves his new area and I'm definitely enjoying my new position(not that I didn't like my previous position but you know what I mean).

Well, Boulevard is doing the "take me outside growl"...apparently he likes the nice weather as well!
Posted by Mike and Kirsten at 6:52 PM 1 comment: