It's been awhile since I've blogged so I thought I'd summarize the latest happenings via pictures.

My mom came and visited over Easter weekend. It was awesome to see her and we did a lot in the short time she was here. Cherry Blossom Festival, Crime & Punishment Museum, Newseum, saw 'Ace of Cakes,' ate good food, and enjoyed each other's company! 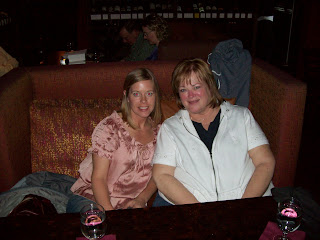 I picked out and ordered my wedding dress while my mom was here to help...but the picture below is NOT my dress. :) You think I'm going to post my dress for Mike to see? NO WAY! But it does seem like my style, huh? YEAH RIGHT...I don't think so! 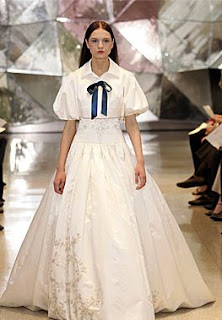 Mike and I went to a Nationals baseball game. Even though the Nationals aren't good, it was still fun and they had a fireworks show after the game. The Nats are red so Mike was decked out in his Husker gear and I certainly have enough red shirts to choose from. 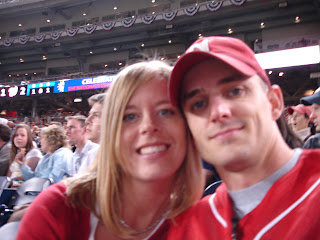 Mike, Tim, Nikki, and I went hiking at Great Falls, MD and it was quite a hike. Though it wasn't super long, there were lots of rocks and boulders to tackle. Yes, the picture below was as steep as it looks. This was the most challenging part! 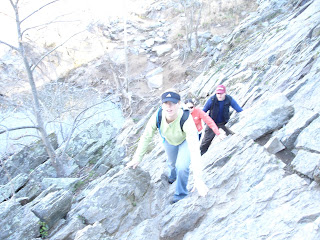 And finally, tonight was my HoCoBoCo(Howard County Books & Cooks) April meetup. We read a great book called "Undress Me in the Temple of Heaven" and everyone made a Chinese food dish.(The book is based in China) That's me in the center of the picture with the grey shirt on. 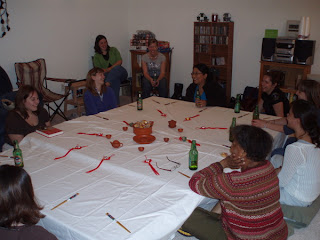 I think that sums it up! Hope everyone has a great week!
Posted by Mike and Kirsten at 7:00 PM 2 comments:

As I sit and drink my Apricot Caramel Torte Green Tea, I thought I'd provide a summary of happenings over the past week from Maryland. I'll try to keep this short.
We went to Tampa, FL last Tuesday through Friday and it was a blast. We went to the beach on Tuesday(got a little too much sun), shopped at the Ellenton outlets all day Wednesday, then went to Ybor City on Thursday and spent some time driving the coast and hanging out at Clearwater Beach. On Thursday it was super windy so laying on the beach, laying in shirts due to the sun on Tuesday, with sand ripping my face off isn't the most fun but we made the best of it. We ate some good food and enjoyed the great weather.
We kenneled the dogs while we were gone and they seemed to do pretty well. The facility is amazing and the dogs are able to be out a lot, not to mention they could run laps in their individual kennels. We thought we'd give Boulevard a break from Stuart so we had them put in separate kennels. The kennel owner said that the only trouble was that Stuart would run the opposite direction when it was time to go back into the kennel...and she said that he's a fast runner. :)
Yesterday, I headed into D.C. via Metro all by myself to watch the Cherry Blossom Festival parade. I got to my Metro stop ok but I get amazingly turned around when I'm downtown. The blocks are about 3 times the size of normal blocks so it took me a while to figure out I was going the wrong way. I finally found Mike(he was working at the parade) and the other USPP officers. Somehow I was able to get to sit in the actual bleachers for the parade...being escorted by a police officer has its perks. The parade was pretty good. They had some GREAT bands, not too many floats, and Alex Trebek was the Grand Marshall so I got to see him too.

Today, I'm doing laundry and cooking Sticky Ham Balls(recipe of my mommy) for dinner. Not going to lie, I don't think I've single handedly done laundry since we moved her. Mike is the laundry man and he needs laundry done a lot more often than I do. I have trained him that we don't need to put our clothes away right away. They usually lay on the spare bed for a couple days before they get placed in closets and drawers.
Ok, I guess "short" turned into long...Have a great day everyone!
Posted by Mike and Kirsten at 8:23 AM 2 comments: