I may be late to the game on this but have you heard of the Cartwheel app for Target?

I've seen that Walmart savings catcher app advertised on TV.  The one where you scan your Walmart receipt and if the app finds a cheaper advertised price at a different store, you get a credit for the difference to spend at Walmart.  I thought it was a cool idea and then my sister posted on Facebook that she used it and has some true savings.

Well - I don't shop at Walmart so it was not an app that I could use.

Then I was reading a blog the other day and the writer is a saver...she's very frugal.  She mentioned that she saved money at Target with her Cartwheel app.  What?!?!?  I do shop at Target so I researched the app asap.  Basically, it's an app that has various coupons, you add coupons to your list of coupons(I think you can add 10 coupons to start), then you just scan the app at checkout and it applies all your coupons.  The other cool feature is that you can scan your items with your phone in the store prior to purchase and it will tell you if there is a coupon available.  Mike and I went to Target the other day and I tried it out.  I scanned each of the items we we planning to purchase and one came up as having a coupon(our milk).  I think Mike was a little annoyed that I had to scan each of our purchases with my phone but I find great pleasure in using coupons and saving a little money so it was worth it to me.

In other news, Mike took the day off yesterday and made me new raised garden beds.  Yay!  They are absolutely beautiful!  They aren't totally installed yet but I love them so far.  I'll post pictures once they are done.
Posted by Mike and Kirsten at 9:53 AM No comments:

I've struggled my entire life with people pronouncing my name incorrectly.  Generally, I don't care that much especially if I'm meeting someone new.  I'm sure I say my name fast so they may hear Kristen or Kiersten.  Depending on the crowd, I usually emphasize the Kiirrrr part.  I also realize the spelling of my name can lead to a couple different pronunciations so I get it.
There are a couple situation that can wear on me occasionally:

2) Spelling my name wrong in emails when the correct spelling is right in front of you.  This generally happens more at work.  I realize people are not doing it on purpose but my name is right there in front of you so all you have to do is copy the name.

For the record, it's Kiiirrrsten.  It's ok if you slip up and say the wrong name occasionally or occasionally spell it wrong in an email(frankly, sometimes I even type the 'r' before the 'i' in emails) but maybe we should all take extra care and an extra second to listen to or read/write names properly.
Posted by Mike and Kirsten at 5:00 PM No comments:

Usually around the time I've finalized my plans for a trip back to Nebraska, I start missing my Nebraska people A LOT!  I remember when we first moved away from Nebraska thinking to myself, "Well I'm going to miss my friends but I'm sure I'll find new friends to replace those relationships I'm leaving behind."  I hope you see all the issues with that thought process but that's truly what I thought.

Well, that actually doesn't happen and now I realize I don't want or need that to happen.  Let's take "family" first...well, I knew I would never replace my family but I definitely value and appreciate the time I have with my family.  I hate to brag but I have a pretty amazing family and I truly enjoy hanging out with them.  No really, I could go back to NE and only see my family and be content because they are my best friends!  We laugh, we cry, we argue but they are amazing.

Moving onto non-family friends - I have a few incredible one's in Nebraska that should not and will never be replaced.  When I moved away from Nebraska, I did eventually realize that there are some friendships could not be maintained due to proximity...and that's ok!  I slowly drifted away from those friends(or became more like acquaintances and that's also ok).  But I have a few friends that I tear up when I think about because I miss them so much.  Even being 13 hours away, they are always there for me.  We have so much fun when we're together!  I never feel judged by them and they accept everything about me...the good, the bad, & the ugly.  They make me feel like I'm a valuable friend and I hope I make them feel the same.

So - I'm over the thought process of "finding new friends to replace those relationships."  I have some lovely friends here in NM but, by design, those relationships really can't ever be the same as my NE faves. What I mean "by design" is that my local relationships don't have the history, haven't seen how I've changed and grown as a person, haven't experienced any of my milestone's as a teen/young adult...new friendships and relationships have to start from square one and build from there...so we're building and that's cool!

Ugh - but I sure do miss my Nebraska people!!  Can't wait to see you all soon.
Posted by Mike and Kirsten at 4:30 PM No comments:

In early September, we took a trip to Moab, UT for a mountain bike trip on the White Rim trail.  You may recall that we did a similar trip in March of 2013 and you can refresh your memory by this post if you'd like.  I made it the entire 80'ish miles...and not to brag but Mike didn't even finish the last mile(which is a huge & long incline out of the canyon).  In his defense, he was having major knee issues but still, I felt like a rock star for making it the entire way!  I teared up at the end when I finished that last climb.

We drove up Sunday and spent Sunday afternoon in Arches National Park.  It was quite hot and I was astonished at how ill-prepared people were.  A 16 oz bottle of water isn't going to cut it folks. 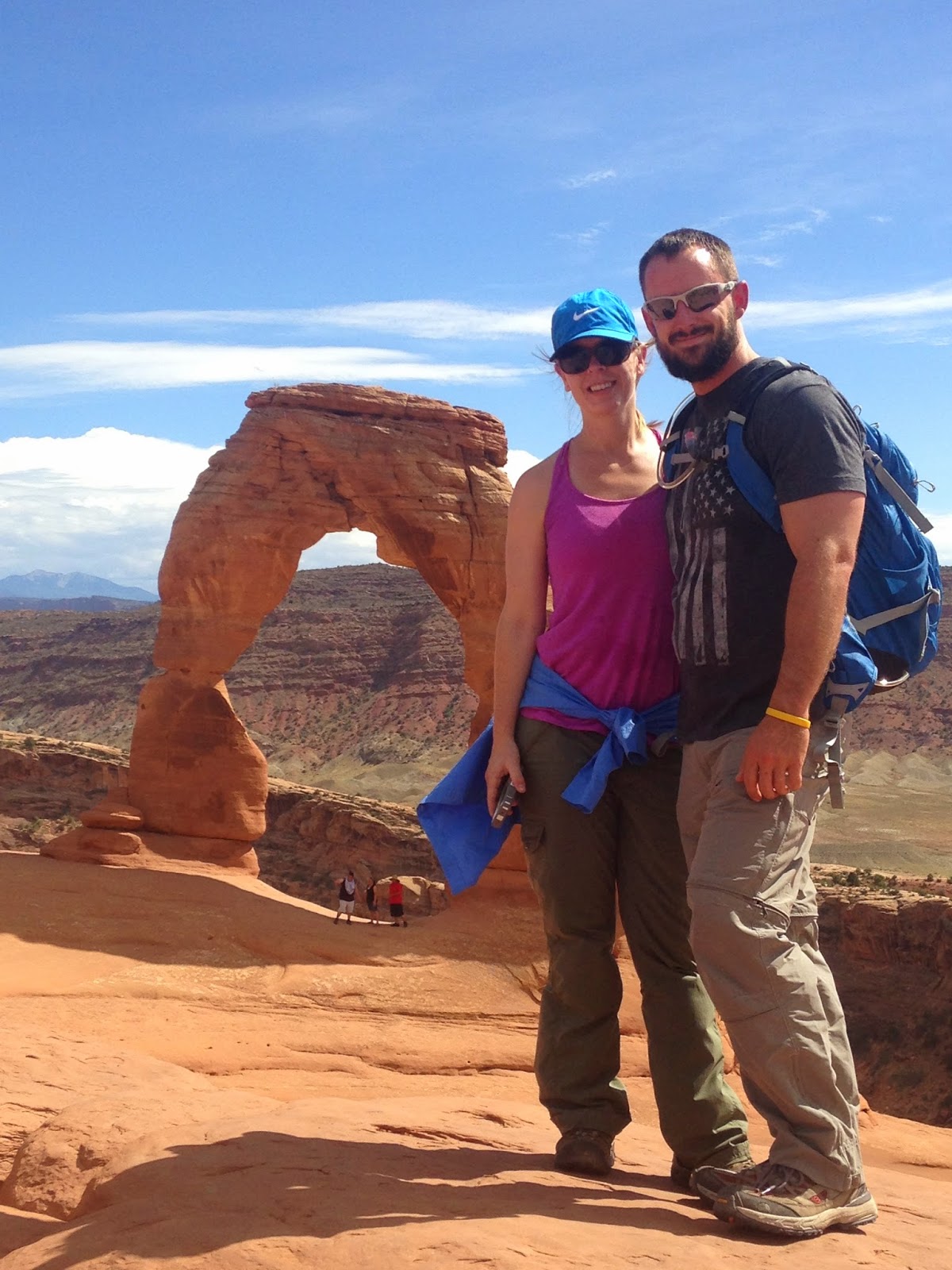 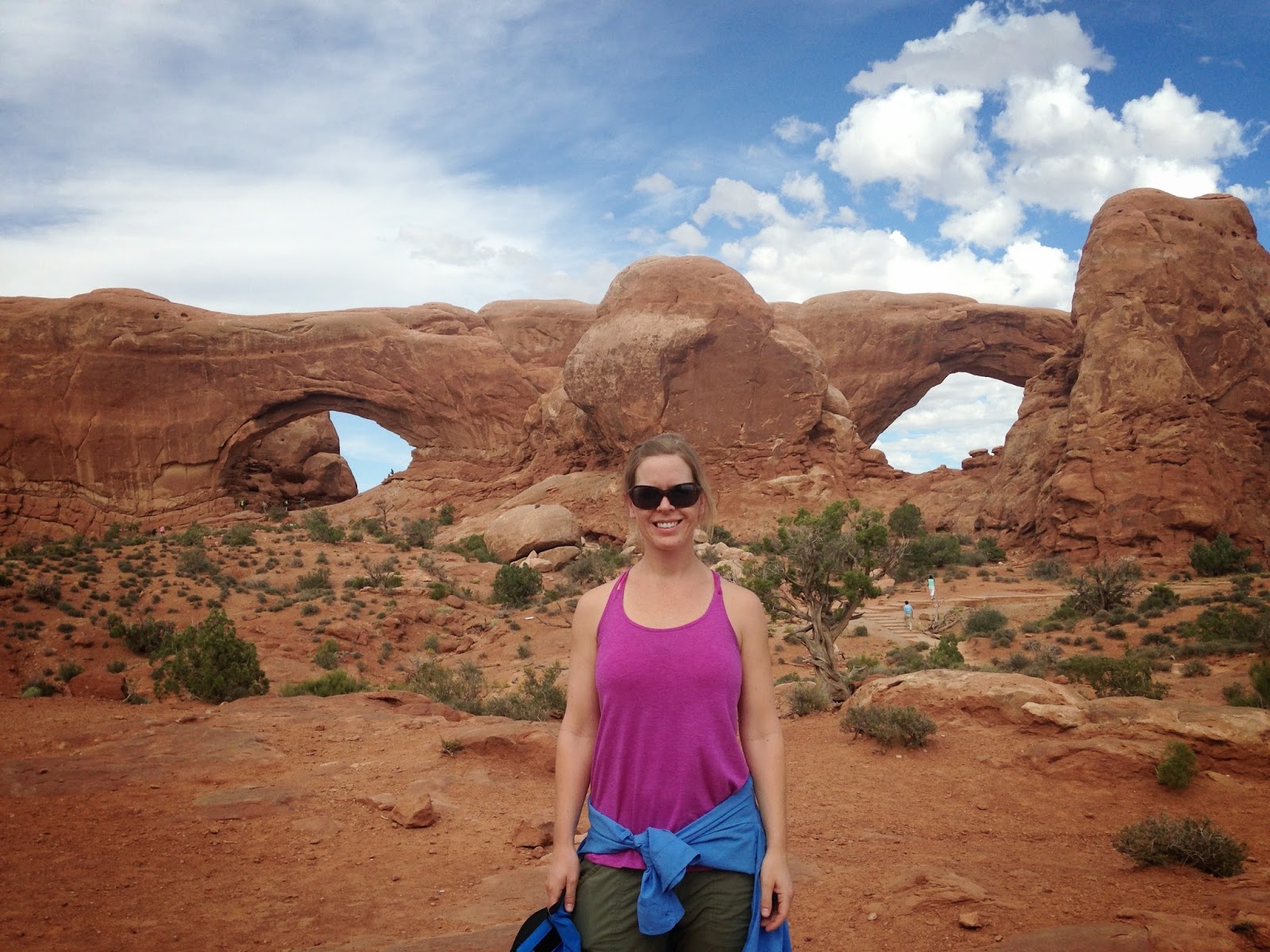 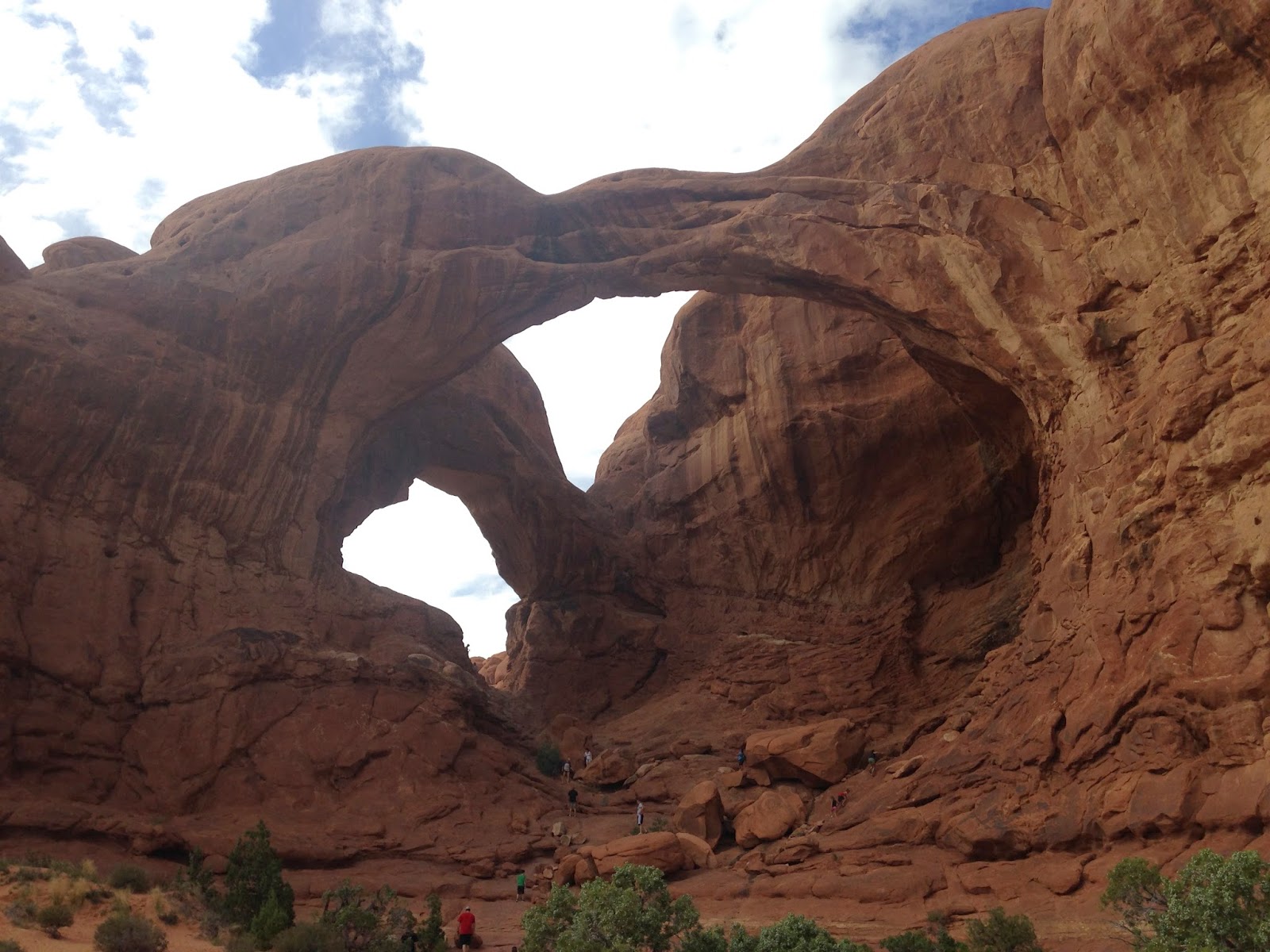 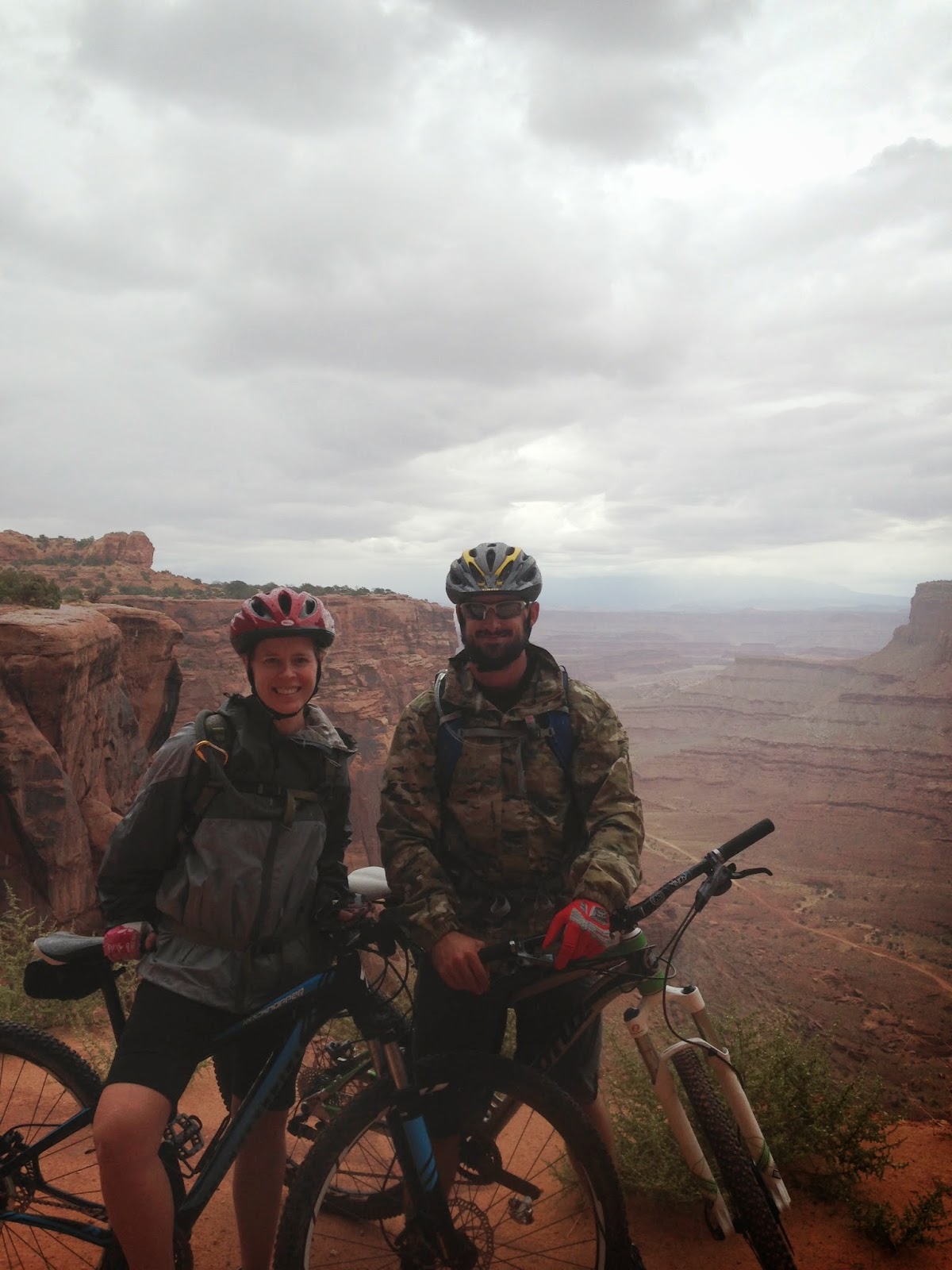 And we descended into a rainy canyon(Canyonlands National Park) on Monday morning. 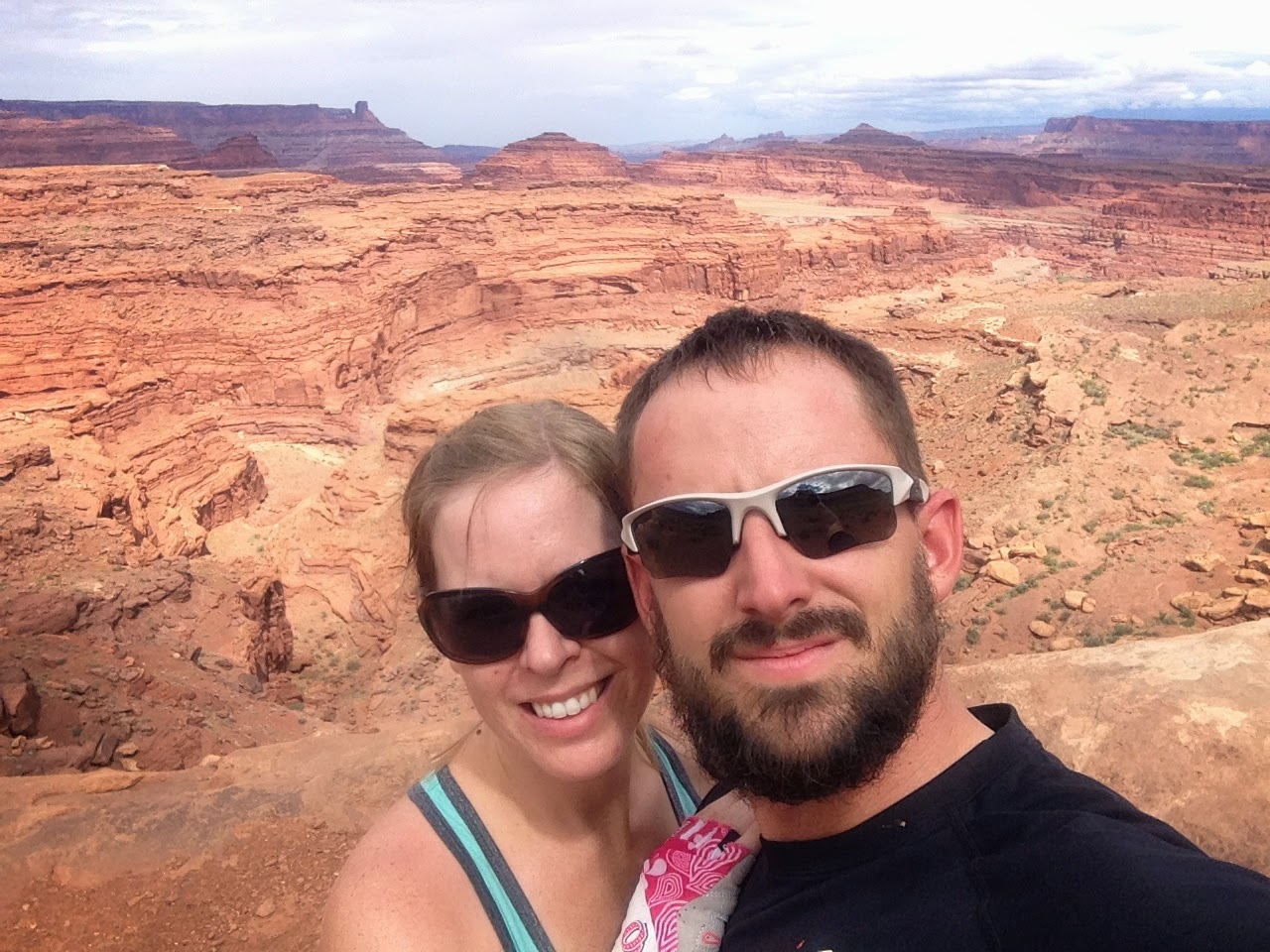 Snack break - there were many, many snack breaks. 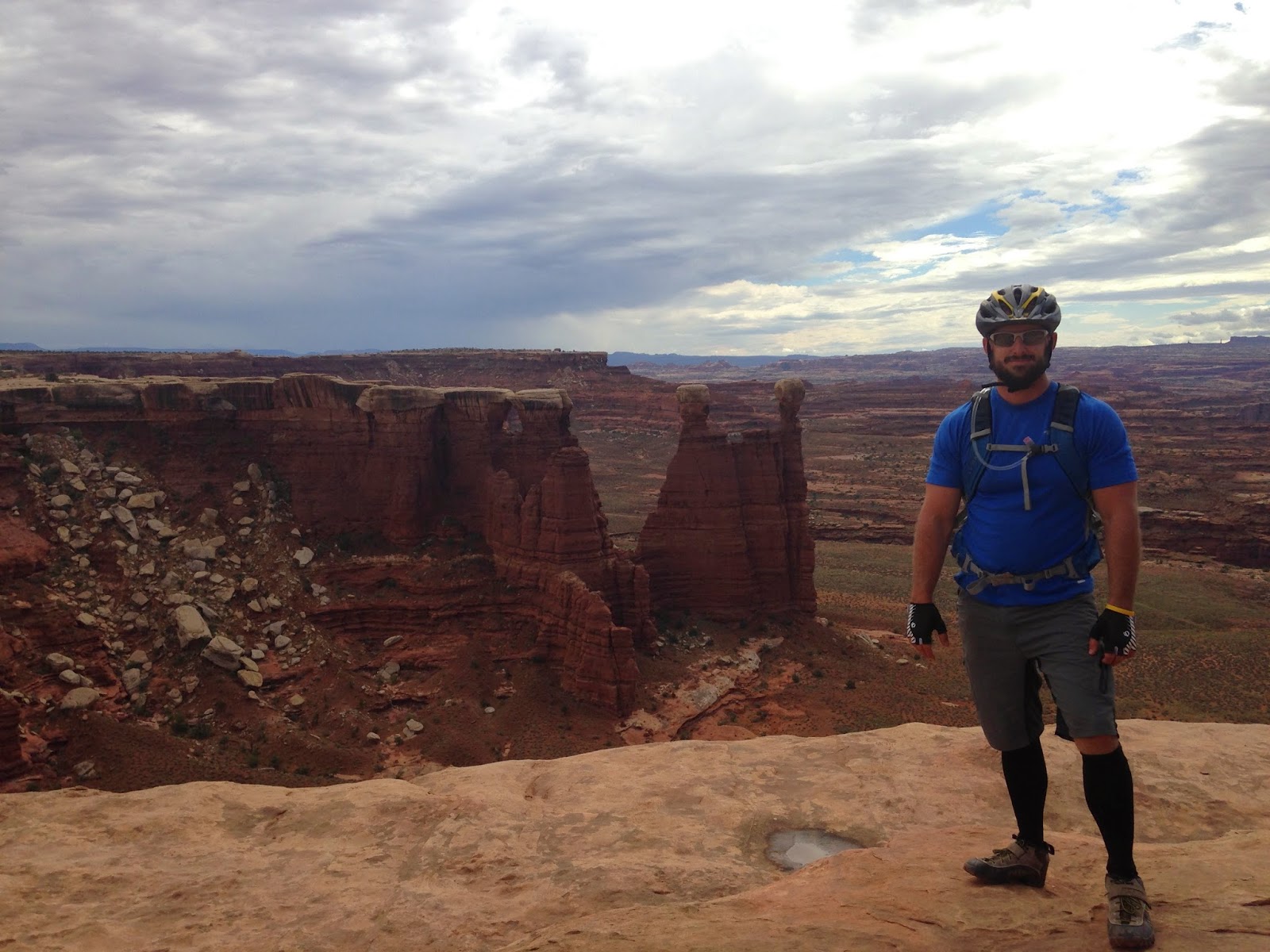 The views are breath-taking! 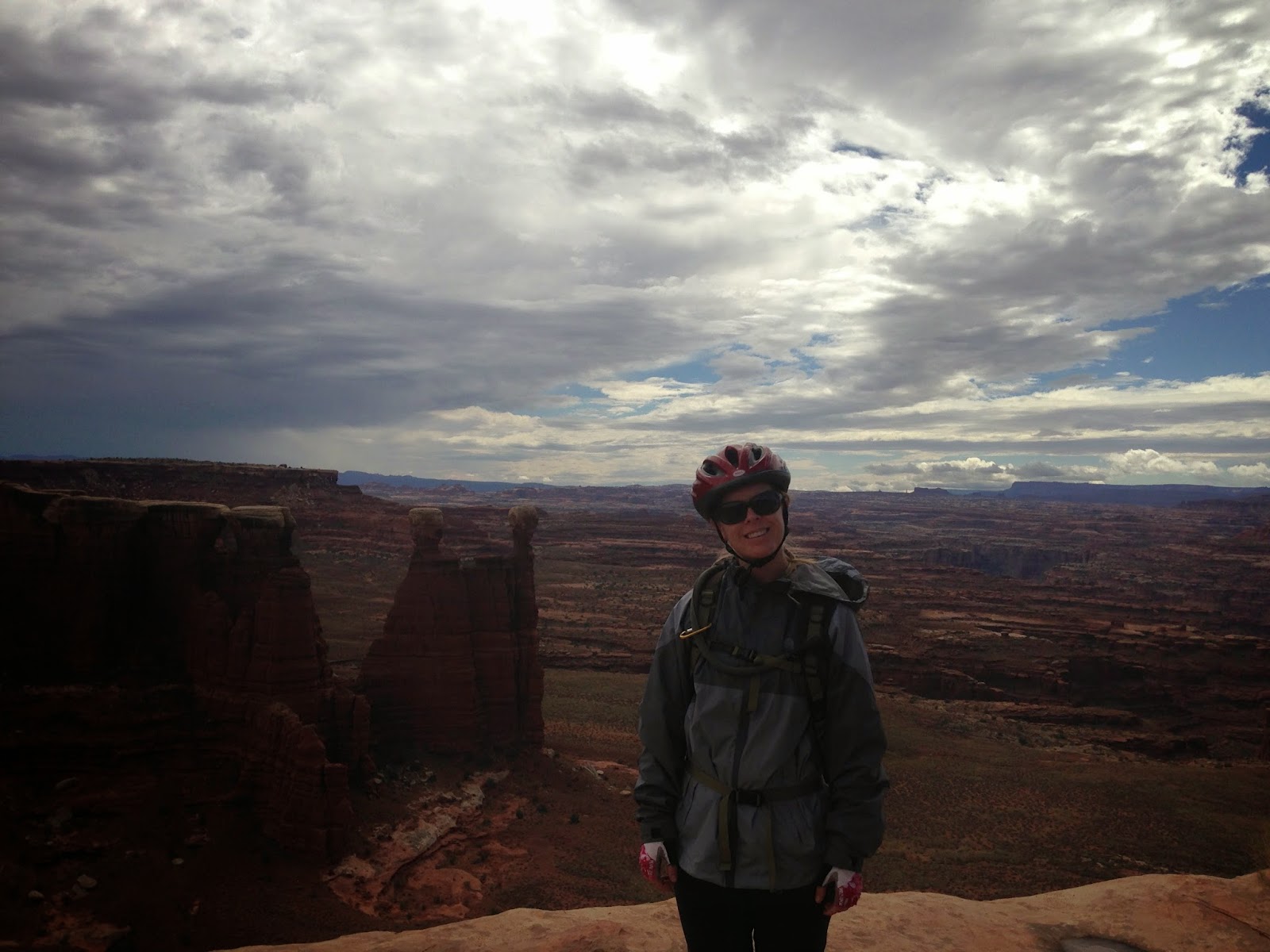 Suited up for a little rain. 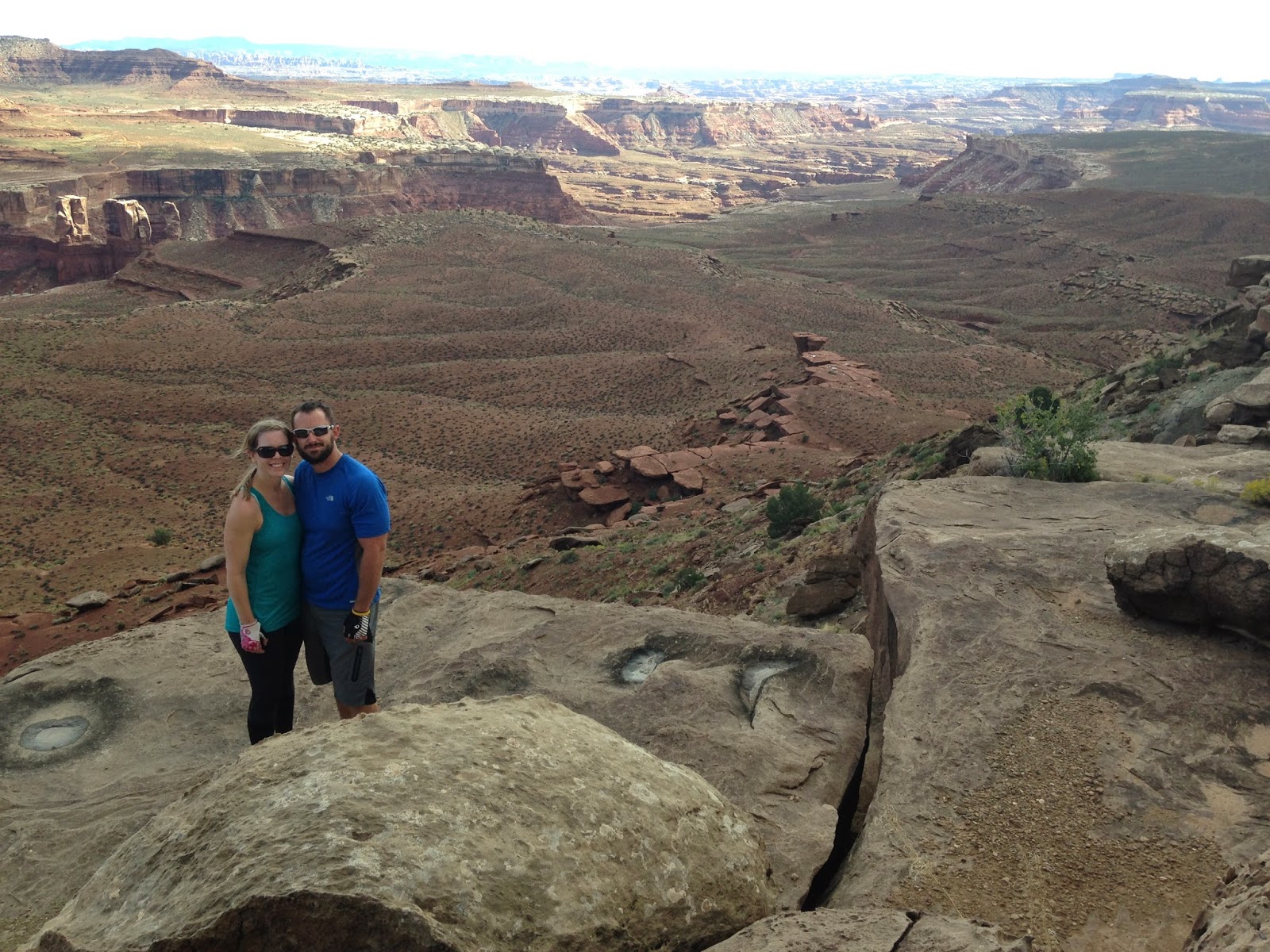 I mean...can you even stand this view - it's just incredible! 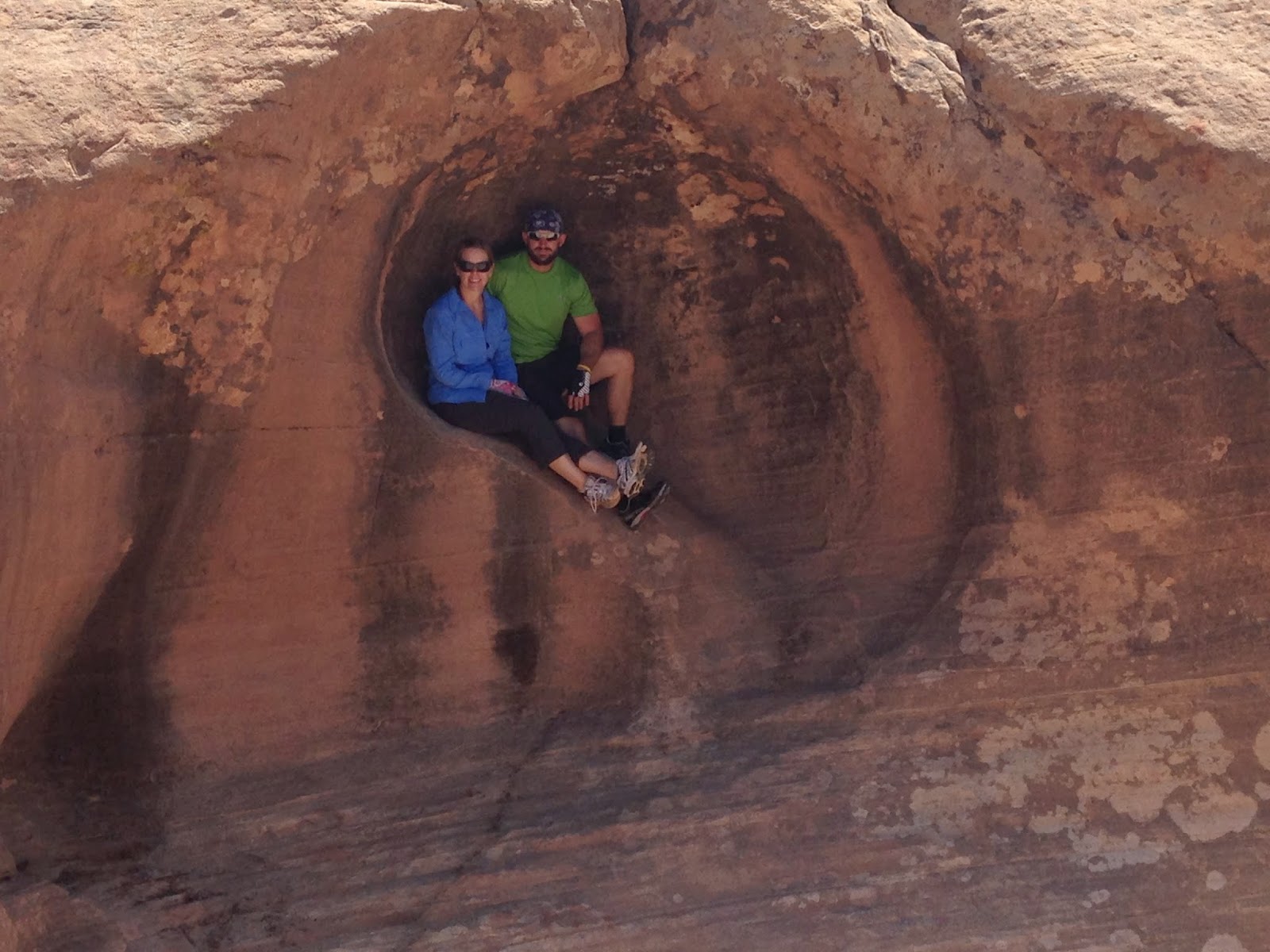 We climbed down into a slot canyon from the trail and relaxed in the shade for a bit. 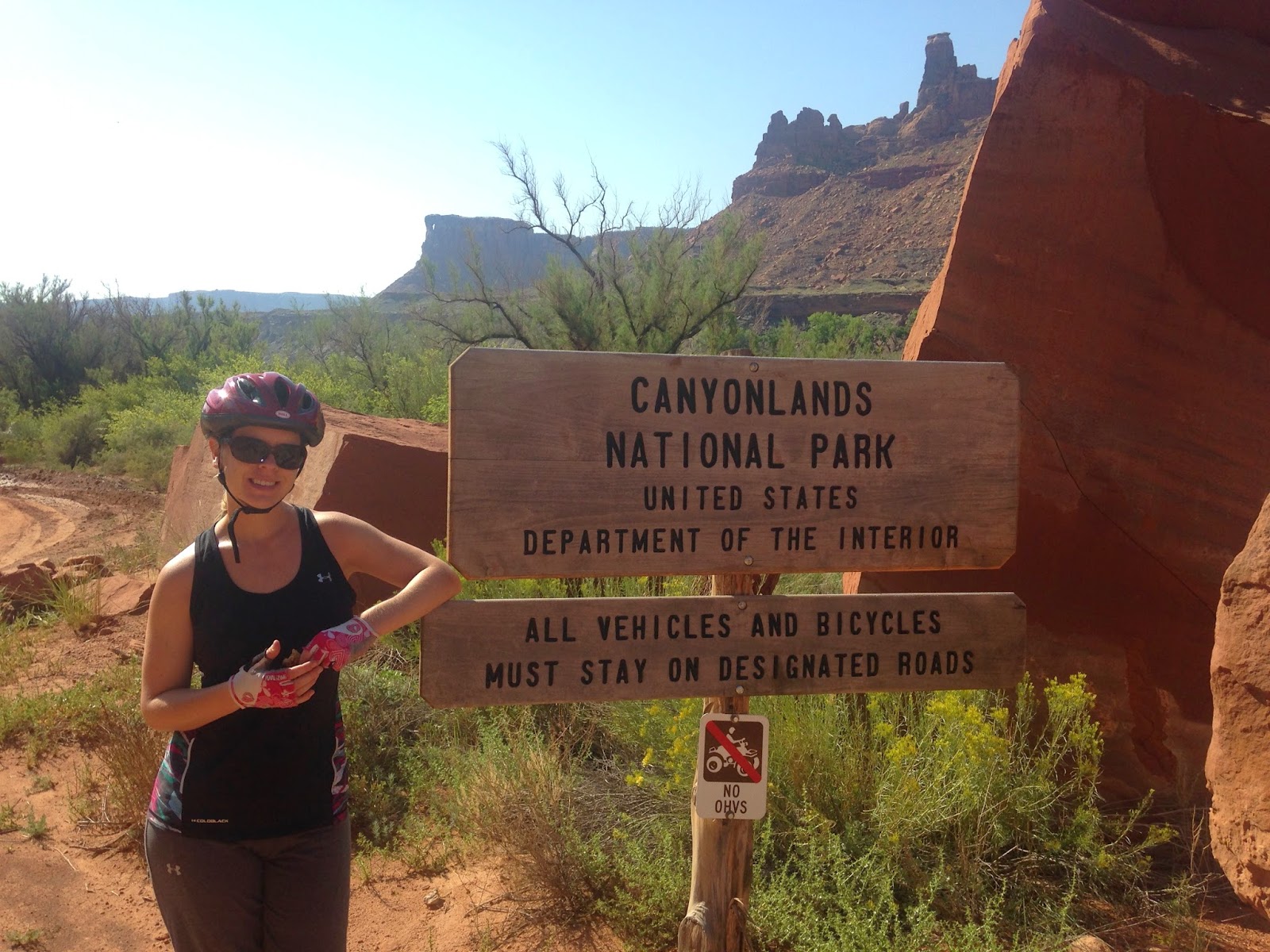 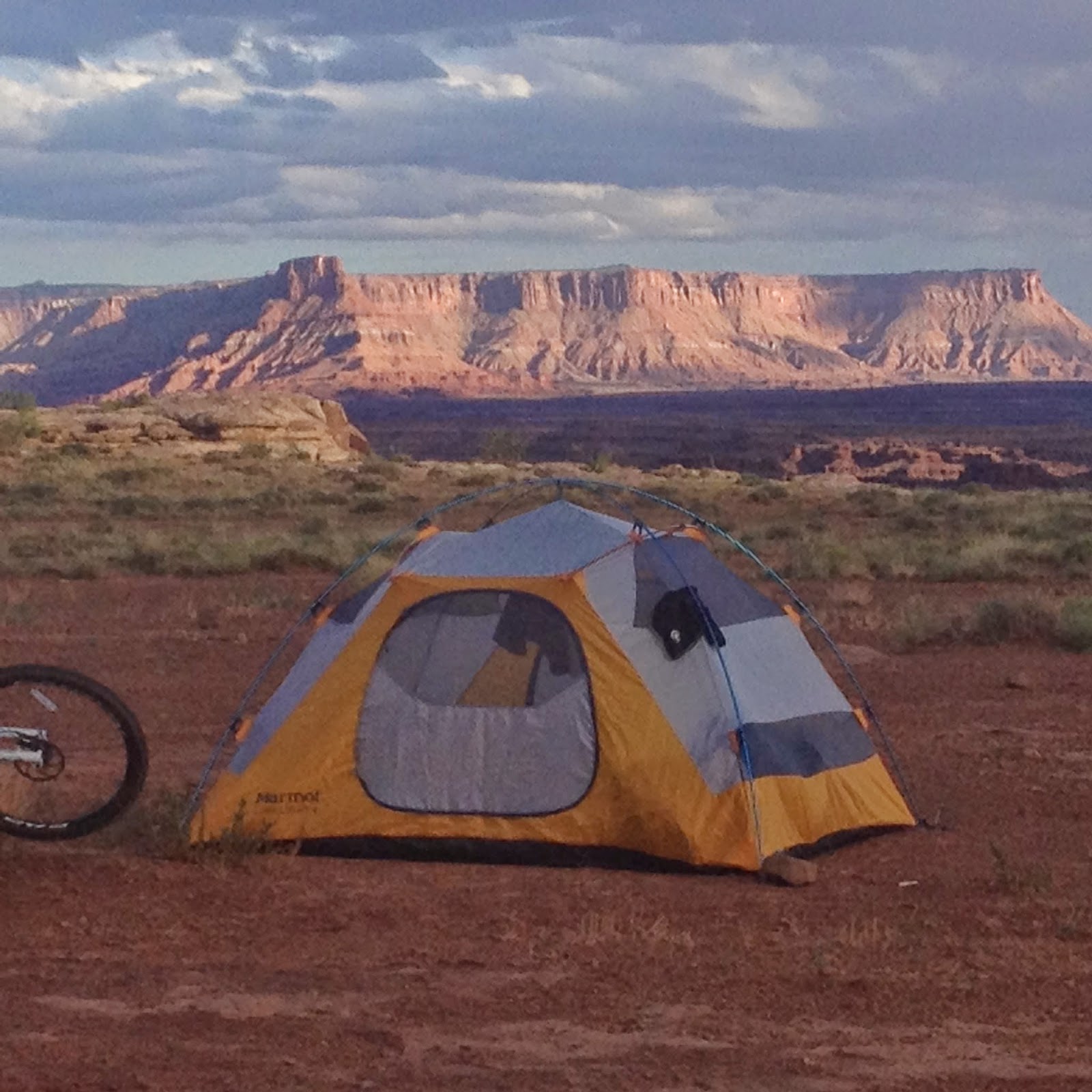 Our tent, our view the first night!  After 3 nights of setting up and tearing down camp, I was about done with that task.  We have some incredible sleeping pads so our sleep wasn't too bad. 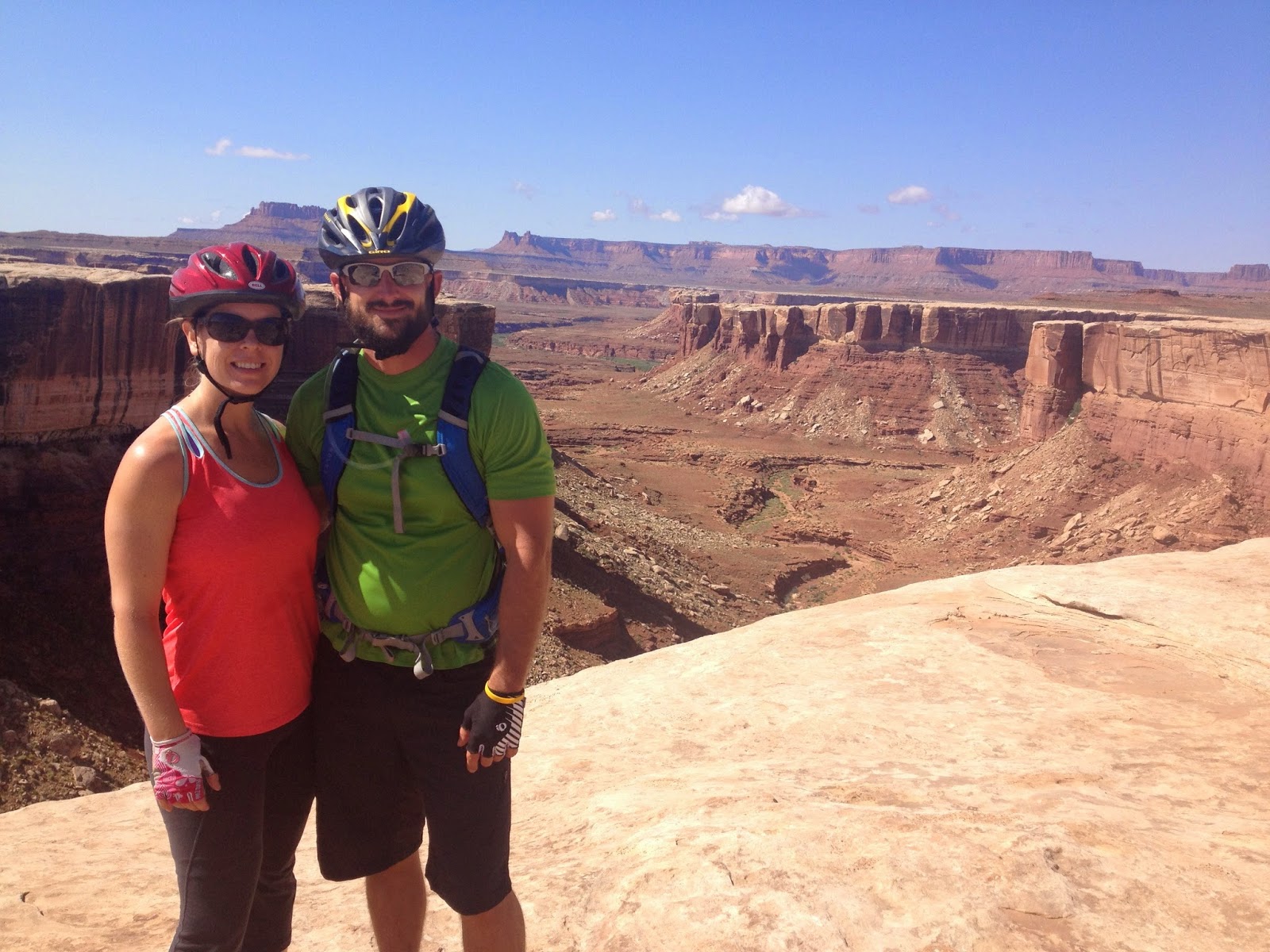 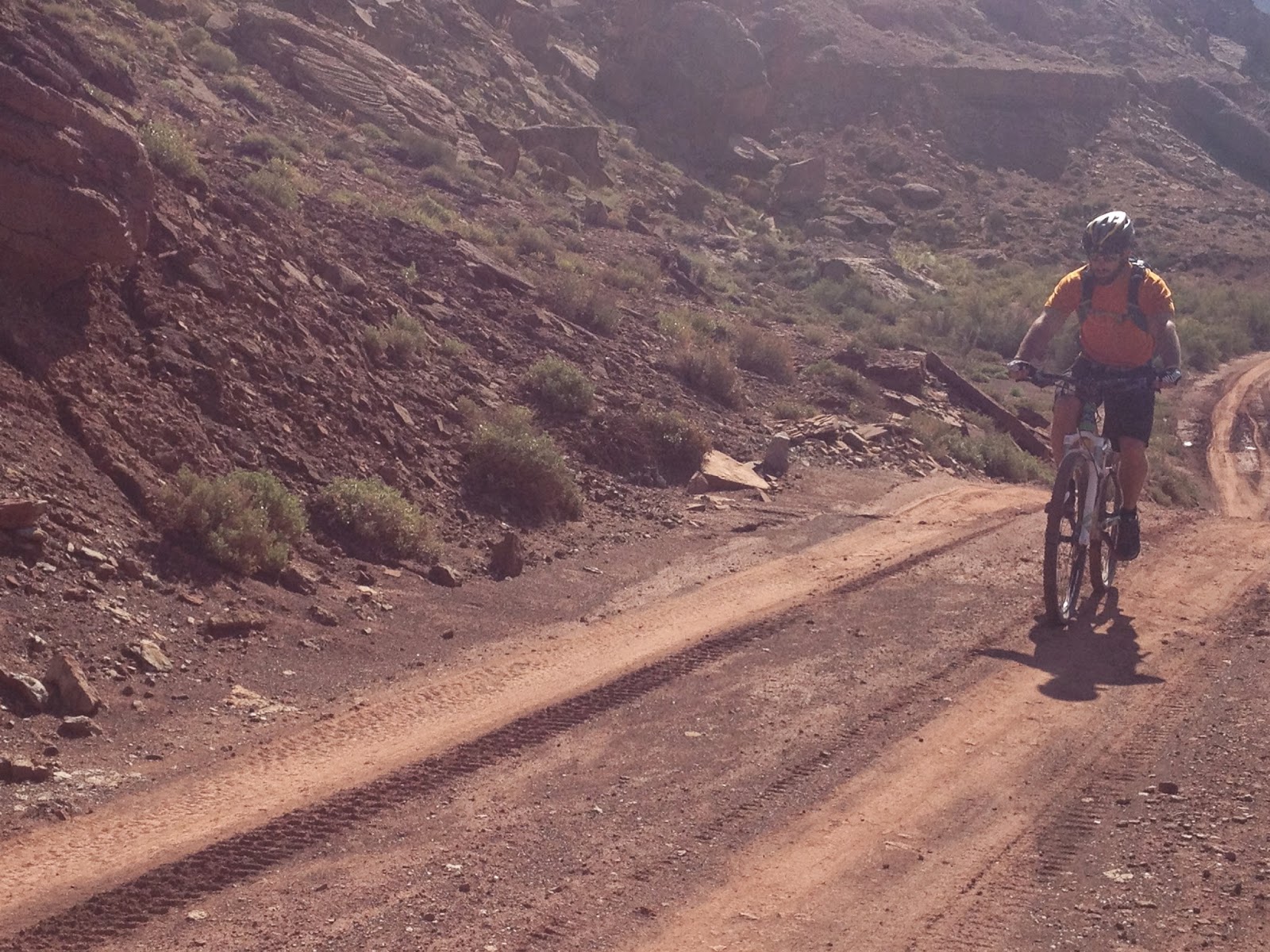 Mike was usually in front of me so I never got a lot of pictures of him riding - this was the last day when his knee was shot so it was more my pace. (for the record, his knee is back to normal) 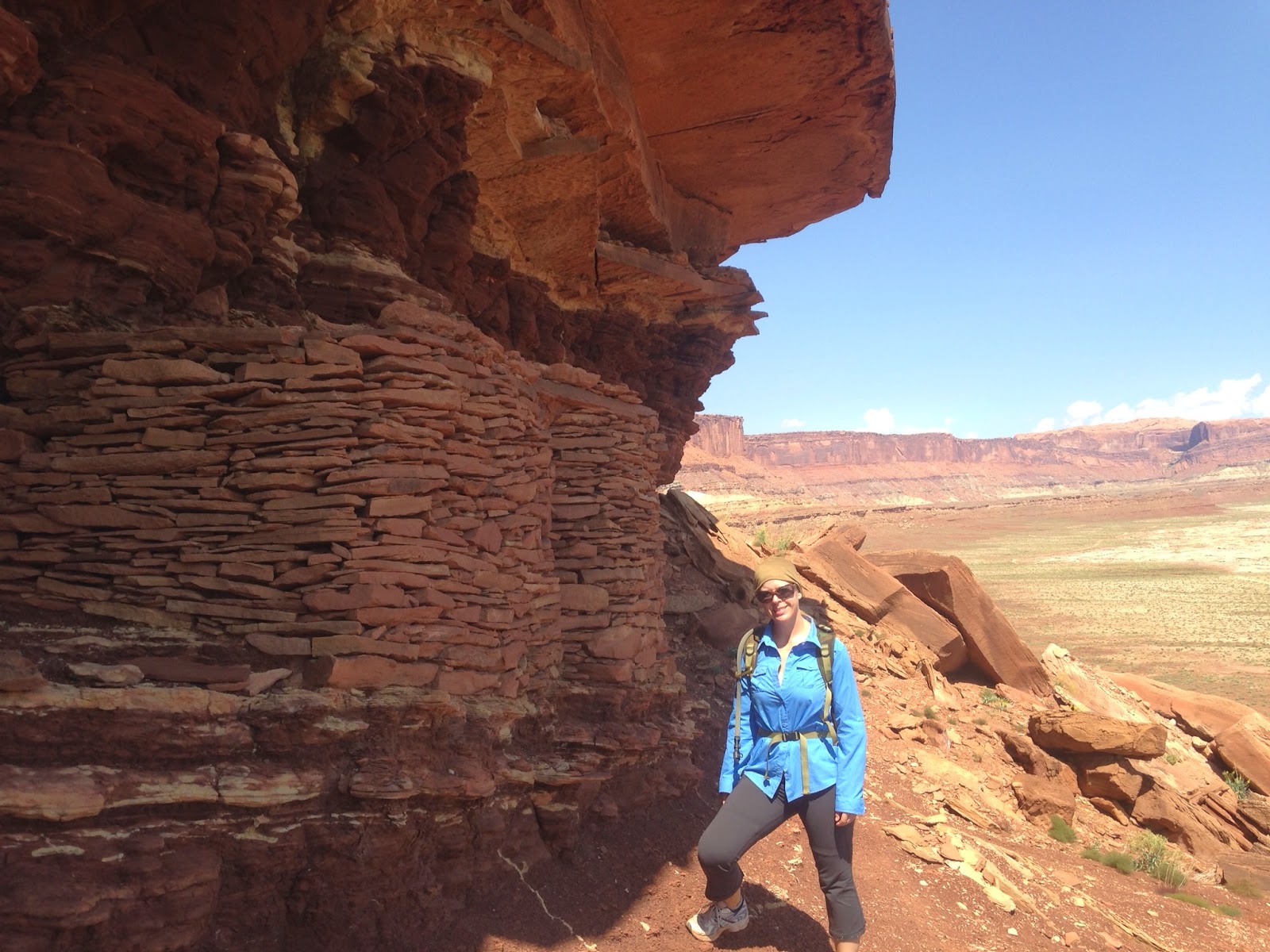 We took a break and hiked up to a historic Native American grainery.(on the left side of pic)  Again - spectacular! 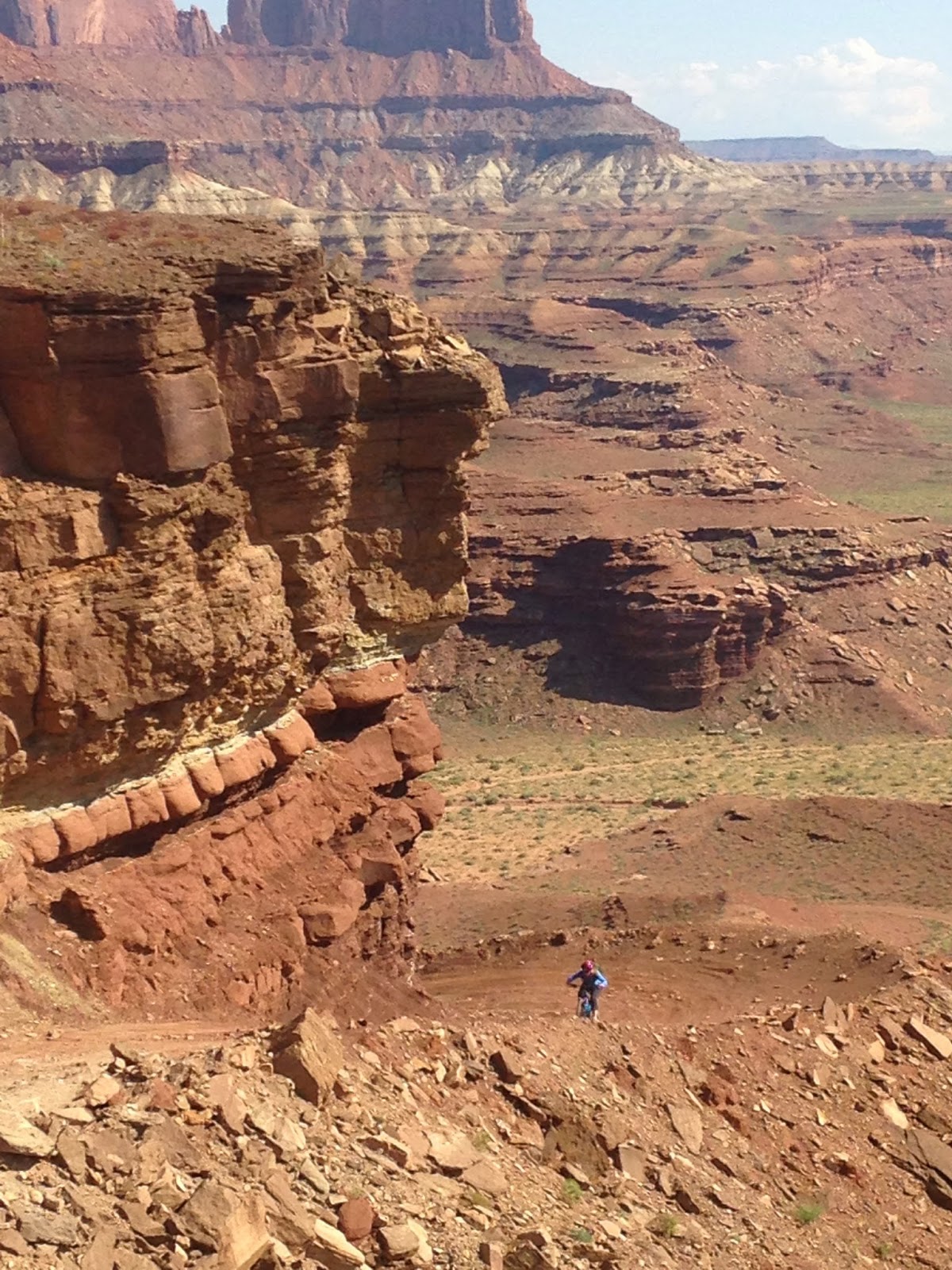 That little blue dot is me climbing and climbing and climbing.  There are about 4-5 major climbs.  They are relatively short-lived but they are intense.  My tactic was to ride as far as could up the climb until I basically fell over or starting sliding, then I'd walk to spot I could get back on my bike, ride as far as I could and repeat until I collapsed at the top of the climb.

A fantastic trip!  I could do this trip every year and be happy.  It's painful at times but the rewards of scenery and accomplishment are priceless!


Posted by Mike and Kirsten at 6:53 PM No comments: