my tv has no sound and I need to tell everyone I know!!

Since I have no sound coming out of my TV, I headed to the internet to calm me down. :) While I'm here, I thought I'd update the blog!

First of all ~ exciting news that I haven't shared yet ~ Mike received the 'Officer of the Month' award for December for his district, which is made up of about 80 officers all together(I think anyway!). Congratulations to my hubby on his award! I haven't seen any proof or certificate but I trust he is telling me the truth, right Mike? :)

Today I had to go to the post office because I've been procrastinating sending some documents that were due to their location by December 31st. (in short, they were documents registering a free trip we got awhile back) I recognize that overnighting a package is not a new service but I took the documents in around 1pm or so and they are being overnighted to California. She said they will be there by 12pm tomorrow. Seriously?? Think about that...less than 24 hours later, my small little envelope will reach it's destination on the other side of the United States? Think about it...that is pretty darn cool. And that's quite the coordination to make sure that envelope is on the plane along with all the other overnight packages. Again, I realize this is not some new service but for some reason I really got to thinking about how awesome that is! Especially when I procrastinate!

Christmas at the Carpenter household was a success...Tim & Nikki came over, we ate, we played a board game, and played wii. Always a good time. We missed our families...but were grateful we didn't get the snow storm the midwest received. It did, however rain most of Christmas Day and into the 26th, which resulted in melting all the snow we had left! The ground is finally dry and we can take the dogs out now without having to wipe their paws off before coming into the house. It's the little things that make me happy!!!

Well ~ Happy New Year to you all! Hope your 2010 is filled with love and new exciting adventures!
P.S. Congrats to my cousin and fellow blogger Janna on the birth of their 5th child, Owen! What a blessing! :)
Posted by Mike and Kirsten at 5:55 PM 1 comment:

lots of sun and lots of snow

We're back in the U.S. from Mexico and we were warmly greeted with about 1.5 feet of snow! Lucky us!
Mexico was fantastic! I, personally, did a whole lot of laying around and reading(and probably way too much eating)...spent some time at the spa(which I've never really done before) and hung out with Mike's parents. The resort wasn't crowded at all, which was very nice! We spent some time in Playa Del Carmen and I would definitely recommend Playa over Cancun if you plan to go to that area of Mexico. Mike was able to get his advanced diving certification through Phantom Divers while we were there so he was diving all day Monday and 1/2 day Tuesday. On Tuesday, he encountered some sort of 6 foot shark...YIKES! On Wednesday, Mike and I took an excursion to Selvatica for the 'Extreme Canopy Adventure.' We were able to experience 12 ziplines(and both of us ziplined upside down too!! even "scared of heights" Mike did!) and we swam in a beautiful cenote. Thursday was another lazy day and we got to the Cancun airport around 10:30am on Friday.

Our flight out of Cancun was delayed because Miami was having rain and tornado warnings. We finally left Cancun at 3pm, arrived in Miami, and sprinted to our connecting gate, after going through all the Customs hoopla. I proudly won the race to our gate...Mike may be able to bench 2,000 lbs but I can outrun him any day. :) Luckily our flight into DC was also delayed so we didn't miss it. Then we landed in D.C. to a couple inches of snow, drove home, and woke up to about 7 inches. It snowed all day Saturday with an accumulation of probably 1.5 feet. They finally got our sidewalks scooped this afternoon so I don't have to carry Stuart to the partially clear street anymore for him to do his duty. :)

~Enjoy some photos of our trip ~ 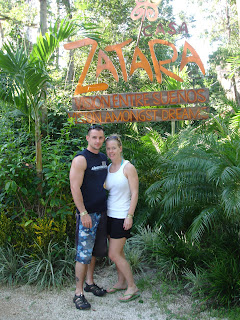 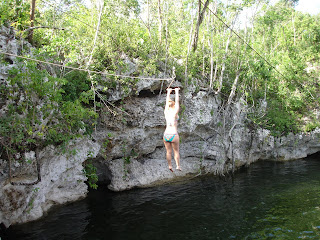 (Me ~ ziplining into the cenote) 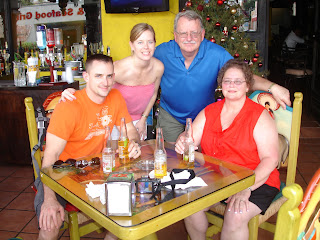 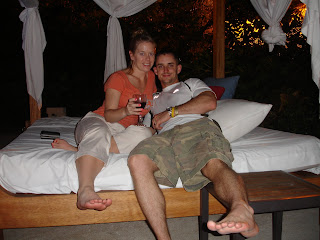 (Enjoying some wine on one of the beds by the pool.)
Posted by Mike and Kirsten at 3:40 PM 1 comment:

the snow has finally arrived

Maryland has finally received some snow...which I'm sure means the entire east coast will be shutting down for the day. LOL! And with the snow comes Mike and Kirsten turning our furnace on for the first time this winter. We made it to December 5th with no furnace which I'd say is pretty good. Here is a picture of Stuart "enjoying" the snow. (well for 5 minutes anyway) :) 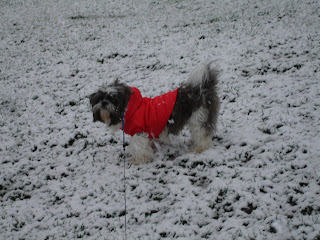 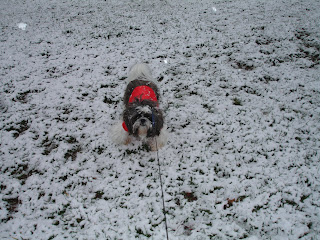 This last Thursday, Mike was able to get me a ticket to the National Christmas Tree Lighting in the Ellipse by the White House. I had a great seat and was able to snap many pictures and record a few videos. Let's see...who was all there? President Obama + family, Vice President Joe Biden + family, Sheryl Crow, Randy Jackson, Jordin Sparks, Mr. and Mrs. Santa Claus...and many more. It was a great time and the weather was pretty good for it also. It was a bit breezy but could have been worse probably. Here are some photos and a video(sorry for the videography!) 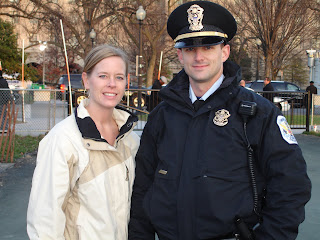 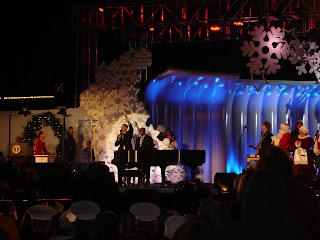 The countdown!
Posted by Mike and Kirsten at 9:56 AM 1 comment:

a few firsts for us

We've had a few "firsts" over the last month.

1) Mike and I celebrated our first Thanksgiving as a married couple. We had a lot of fun...we spent it with Tim & Nikki at their place. Traditional dinner ~ Turkey, mashed potatoes, green bean casserole, stuffing, rolls, and a cake...oh and some yummily seasoned popcorn...all very delicious. We played bowling on the Wii and then played Yatzee. It's always a great time with Tim & Nikki...I really look forward to hanging out with them. They'll be coming to our place for Christmas (as long as they don't jet off on a vacation.) :) 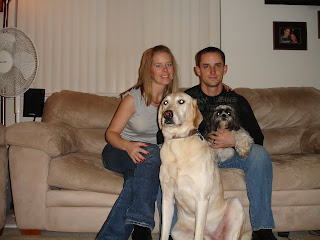 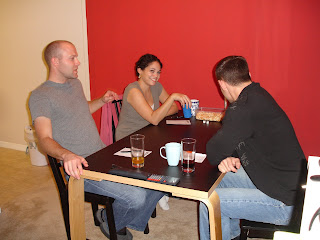 (Mike and Tim seem to be just as uncooperative as the pups - Nik looks beautimous though...Thanks Nikki!)

2) I wore my winter coat for the first time last night. :) I've been getting by with a sweatshirt and scarf but last night on the way to volleyball, I just couldn't take the wind so I bundled up in a sweatshirt, scarf, and my winter coat.
3) Mike and I enjoyed a lovely date night at Iron Bridge Wine company(Mike's first time there) a week or so ago. We went all out with appetizer, entree, dessert, and wine. It was both of our first time eating Foie Gras...very yummy.
As I was telling Kate and Adena at dinner last Saturday...Life is great, but nothing earth-shattering to report. Life is fantastic just the way it is! So thankful for my husband and kids(aka Stuart and Boulevard) during this holiday season.
P.S. Are you still trying to GET ACTIVE?(see previous post) Keep up the good work. I'm still working hard at my "Cross-train to win" competition. Up today is kickboxing and either Cross-Training or Water Aerobics ~ I haven't quite decided.
Posted by Mike and Kirsten at 10:03 AM 3 comments: