guess what's coming to our area?

We live about 5 minutes away from a shopping area which has Target, Starbucks, Albertson's, Best Buy, TJ Max, Petsmart, etc.  About a month ago, we noticed that the sushi restaurant located in that area closed but they were doing construction on the building.  At the same time, we noticed they were building a brand new building right next to the former sushi place.

A month or so after that, Mike and I both saw the Buffalo Wild Wings signage on the old sushi restaurant.  Our first reaction was, "that's sort of cool."  Although neither of us really love Buffalo Wild Wings, it will hopefully be a new/fun place close by to have drinks w/ friends or watch sporting events.  Seeing the sign also reminded us of an experience we had at the BWW in Lincoln.  I can't recall who was with us but we sat down to order some wings and they were out of wings...huh?!  You are Buffalo Wild Wings and you're out of wings?  I'm not really sure how that happens...wouldn't you race to a grocery store and just buy some??

I recently drove past this area again and the sign on the new building next to BWW said Panera!  Suhhweet!  This really excites me because I really enjoy going to coffee shops and spending a few hours reading, blogging, drinking coffee, etc.  I've also hoped for a restaurant that carried yummy bagels so now I get to read and eat my delicious bagel from Panera.

Santa Fe has some of the best food I've ever consumed.  The restaurants are amazing, unique, and have great ambience but sometimes a gal just craves a chain restaurant.  Life would really be complete if Santa Fe got Mr. Goodcents, Bison Witches, Taco John's, & Runza!!
Posted by Mike and Kirsten at 5:00 PM 1 comment:

Back in March, in last-minute-sort-of fashion, we decided to join about 10 others(and a 6 month old baby<~yes, you read that right!  Baby & parents did amazing on this trip!) on a 90 mile bicycle trip in Moab, UT.  By last minute, I mean we literally did one "training" ride of 5 miles to prepare ourselves for 90 miles.  Real smart, don't you think?

We drove to Moab on Tuesday evening, I rented my bike on Wednesday morning,(Mike already had a bike and my bike was a Target special and would have lasted 2 seconds on this trip) and we descended into the canyon on the White Rim trail on Wednesday mid-morning.  The mileage was broken up as follows: (approximately)
Day 1 = 30 miles
Day 2 = 15 miles
Day 3 = 30 miles
Day 4 = 15 miles

We had three support vehicles that carried all of our gear(camping, clothes, food, water, etc).  We rode all the miles for the first day and we actually felt pretty good.  The 2nd day was crazy windy(like sand blast your face windy)and pretty chilly so we loaded our bikes and rode in the truck for the last 4 miles or so.  We rode the entire way on Day 3 but that evening was also crazy windy and chilly so we did not have good sleep.  Mike and I opted to ride in the support vehicle the entire last day and I was more than ok with this decision.  If I recall, there were four major climbs and I managed to skip all of them except one...you'll see me walking my bike up in the slideshow.

For not training at all, I felt we did pretty good.  This trip put the bicycle-bug in me and a few weeks after this trip, I upgraded my Target special to a "real" mountain bike, which I've been loving and riding often!

Here are some pictures of our trip - the scenery was more than incredible and the people we were with were superb, fun, & very encouraging to an amateur like myself!  I hope we get the opportunity to do this again in the future.

**I'm sort of obsessed right now with the song playing in the slideshow and I kind of think it fits the I'm a bad a$$ feeling I felt during this trip.**  :)

Ever since I turned 30(remember when Mike surprised me w/ a trip to Europe?!  I'm still baffled by how he pulled that off), we've made it a tradition of traveling for our birthdays.  Mike's birthday is in February and mine is in May so the timing works out well when we are determining our travel plans each year.
This year for my birthday we went to Puerto Vallarta.  We had a super time...it was a perfect mix of activity and relaxation.  Why wouldn't I want to spend my birthday, Cinco de Mayo, in Mexico?!!  :)  A couple of our friends from NE joined us from Saturday-Wednesday and it was so great to see them and spend time with them!  Since they were leaving Wednesday,(we stayed until the following Saturday) we wanted to pack in as much stuff as we could so they wouldn't miss it.  It was such a great trip and a fun new place to experience.

I'll spare you the details of how we spent every single hour of every day but I will share some of the pictures.  I've been playing with the slideshow feature on our computer and it turns out that creating a slideshow is super simple...who knew?!!  They really make technology easy these days.  I even put a fun and boppy song to it so make sure your sound is on!  :)


Posted by Mike and Kirsten at 4:58 PM No comments:

I know exactly what you've been thinking lately...I'm dying to hear an update on Kirsten's dogs...well...wait no longer!!
Ok, ok - I know that thought never crossed your mind but you're going to get an update anyway.  :)

Boulevard ~
I've mentioned this to a few people but the bottom line is this => Boulevard is becoming a crotchety old man.  It's so funny to see a dogs personality come through.  He just isn't havin' it lately and he's not afraid to "voice" his opinion.  My dogs get fed twice a day and meal time usually lasts an entire 30 seconds so I wait in the laundry room as they eat.  Stuart's food is in a trashcan with a lid that can be flipped open or pushed in.  Ranger and Boulevard's food is either in a big bag on the floor or in an enclosed dog container.  So...Boulevard finishes his dinner and, while I'm standing right there next to him, he'll walk right over to the bag or Stuart's dog food container and start chomping away.  Really Blvd??  Hello, I'm standing right next to you and I see what you're doing.  Then he doesn't even respond when I firmly but politely SCREAM, "No!"  I literally have to drag his head out of the bag.  Good grief!

Crotchety old man example #2:  I think you all know our dogs are most definitely indoor dogs.  Occasionally, I'll leave Boulevard outside in the backyard for a few hours.  My office is on the opposite side of the house but when Boulevard is sick of being outside, he'll start barking.  Ugh!  The reason this is so odd is because Boulevard is generally not a barker.  Other dogs can be barking like crazy at him but he doesn't bark back.

Crotchety old man example #3:  Mike and I have been going on bicycle rides more often after work and when we put our bike clothes, tennis shoes on, and fill our water bottles, Boulevard knows something is up.  Unfortunately, he thinks anytime tennis shoes are put on that it means he's going on a walk...that's not always the case.  If we haven't started our ride yet, we will occasionally hear him howling from inside the house.

Crotchety old man example #4: When we travel, we have a house/dog-sitter stay at our house and watch Boulevard and Stuart.(it's less expensive, better situation for the pups, and more convenient for us) The dog sitter reported that Boulevard peed on the floor almost every night and pooped on the floor once.  I mean??!!!  This is so out of the ordinary for Boulevard that I assumed he was sick or something.  Good grief Boulevard ~ what happened to our angel dog?  I'm happy to report Boulevard is just fine and has had no accidents since we've been home.

It seems, similar to humans, dogs may just get to a point in life where they think So what?  Who Cares!!  I'm just going to do what I want.  Don't get me wrong, Boulevard is definitely still the angel out of our three monsters but it's interesting to see how he changes as he gets older.  After all, he is 8 years old now and that is considered a senior dog.

Stuart ~
I have this posted on Facebook but I think it's so funny.  I came across these birthday hats when I was grocery shopping.  About every hour on the hour that day, I was putting a hat on Stuart.  I think Ranger was home with me that morning and I was putting the hat on Ranger as well.  Mike came home for lunch and I wanted a group picture of me and the dogs.  I put the hat laying on the floor next to me in the picture on Boulevard and he instantly ripped it off.  Stuart was on the run probably thinking This crazy lady and her hat...won't she just leave me alone?  But Stuart is easy to over power so I captured him before he got away.  I put the hat on Ranger and he tried the I'm going to lay down and try to paw this hat off.  Needless to say, it all amounted to a comical picture for Stuart's 6th birthday! 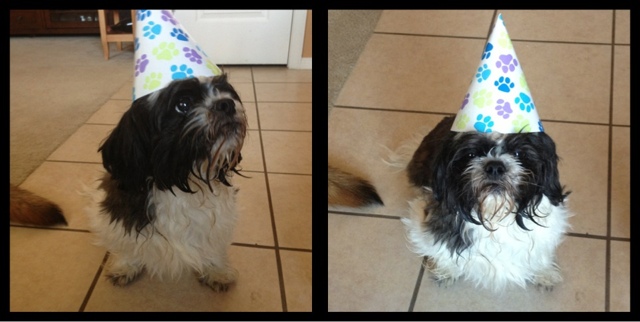 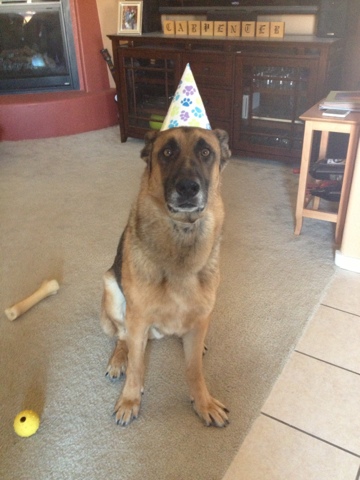 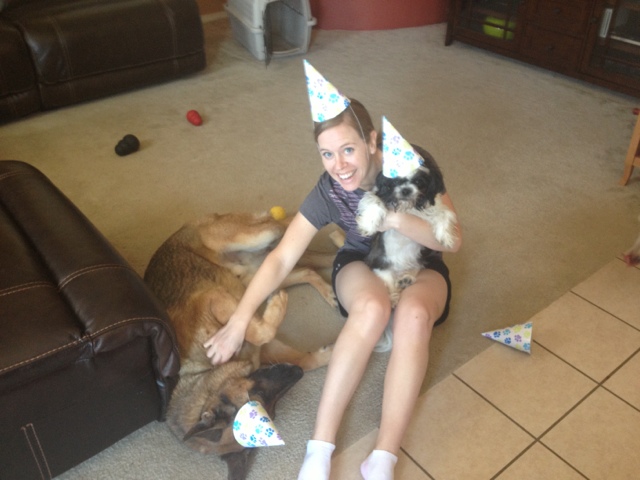