Would you like the good news or the bad news?

More Boulevard ~~>> He hasn't vomited since Tuesday...YAY! However he has got a terrible case of the 'runs,' if you know what I mean. Unfortunately this mess graced our guest bathroom upstairs(that's where Bouley's been sleeping) last night and more unfortunately, I noticed there was blood in it as I was cleaning it up. Another call to the vet...headed back this afternoon to get bloodwork taken and determine if he has pancreatitis. The good news = No pancreatitis! Thank goodness. After the vet told me the possibility of pancreatitis this morning, I was doing a little self-education in between my bouts of tears. The bad news = We don't really know what's wrong but Blvd will be well medicated. One med for the blood in the stool, one med for the liquid stool, and one med to stimulate his appetite. Hopefully he'll take a turn for the better soon. And I hate to complain about the cost because he's worth every penny...but holy moly, this is expensive. Dog insurance is looking to be a better and better investment these days, especially since Blvd isn't get any younger. If anyone knows anything about dog health insurance, I'd be very interested to hear what you know.
Posted by Mike and Kirsten at 4:18 PM No comments:

Boulevard has been sick since Saturday. :( He ate breakfast Saturday morning, and hour later he threw up 6 times, I started crying my eyes out, then pulled myself together, then called the vet, and they were able to fit me in.
Posted by Mike and Kirsten at 7:31 PM 2 comments:

He had a friend over without asking first

Boulevard typically likes people and other dogs. Stuart typically likes people but is normally less than impressed with other dogs.
To set the stage ~ Both of our next door neighbors have little, yappy dogs(similar to Stuart) and Stuart doesn't mind voicing(er...barking) his concern over this fact through the fence. Boulevard will bark occasionally if Stuart gets him wound up but normally he's not a barker. And the little guys on the other side of the fence, bark back at Stuart. It's really to the point that I try to let our dogs out at different times than our neighbors because all the barking makes me a little nuts. Well when they really get wound up, they start pawing at the ground right by the fence(keep in mind that the yards are all dirt right now) and unfortunately, this pawing has caused a hole under the fence.

Well a week or so ago, Boulevard was outside by himself and it appeared as though he was chasing or playing with something. I looked and it was one of our neighbors tiny dogs...he had squeezed his way through the hole under the fence. There is nothing to fear about Boulevard even though he is 90 lbs but he does tend to throw himself around like he is 10 lbs when he gets really excited. I watched for about 20 seconds and Boulevard would sniff at the little dog, the little dog would bark back giving him a piece of his mind, and Boulevard would jump around him...it was quite comical really.
Eventually I went out and grabbed the little guy and passed him back to his owner on the other side of the fence. Poor thing, if I was confronted with such a monstrous dog in comparison to myself, I think I'd be traumatized too. Guess that little guy learned his lesson to stay in his own backyard. I sort of wonder what Stuart would have done if he would have been in the back yard too. :)

Boulevard-The next time you want a friend over, please ask permission! :)
Posted by Mike and Kirsten at 8:47 AM No comments:

an invitation for you

If you recall, I have a goal to run two half-marathon's this year. After the one in Vegas, you would have thought I'd given up on that goal, but I HAVEN'T!!

Anne and I have a tentative agreement to run a half-marathon on September 18th here in Santa Fe, NM. This is an invitation to all of YOU as well...have you ever wanted to run a half or maybe have and would like to do another? I invite you to join us!! Although we are at 7,000 ft, the race appears to be mostly down-hill(trust me, I scoped out the elevation changes first). You are welcome to stay with us too. I suppose I should clarify this invitation is for all the readers I actually personally know -- I'm not sure I want a complete stranger in my house. :)

So - check it out. I'm telling you early so you have no excuse! You have plenty of time to train.
http://www.santafethunder.com/

On that note, we certainly would love some visitors this spring/summer to share our love of Santa Fe. If you are planning a trip in our direction, please stop by. Or Santa Fe has much to offer so start planning your trip here!! Just be warned ~ you may not want to leave once you see this place. It truly is amazingly beautiful and the Land of Enchantment!!
Posted by Mike and Kirsten at 4:03 PM 1 comment: 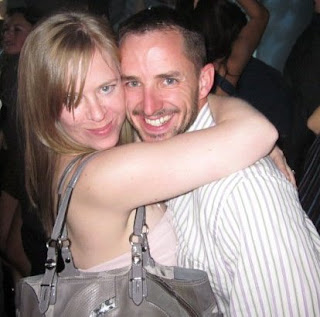 Yes - I finished my half-marathon but it was such a DIFFICULT course!! Even the spectators were shocked at the course as they toured it during the race on a bus. The race didn't have parking so all runners and spectators rode buses to the course from a casino and the spectators had an option of a bus tour showing the course so they could see their runners. Remember that elevation climb that I told you about in my last post? Well it was pretty much torture...I thought I'd be able to capitalize on the downhills but I was so dead by the time we got to the summit, that may legs wouldn't go any faster on the downhills. I finished in 2 hrs and 26 minutes, which I was awefully proud of based on the course difficulty. Let's just say I was in tears by the finish line, due to both pain and relief that it was done. 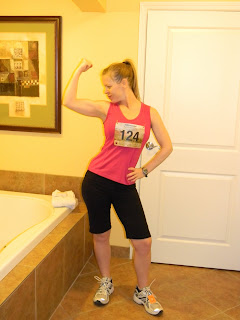 (near the finish line on the verge of tears. tears of pain and tears of joy because it was almost done. my knees felt like they were going to EXPLODE at this point!) 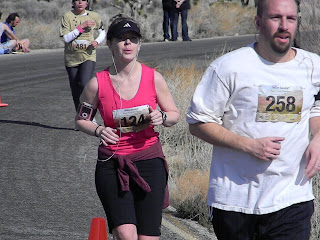 In summary - Vegas went a little something like this ->
Ran my race on Saturday morning, went to the strip Saturday afternoon w/ Anne & Natasha(who were there w/ us), went to Marquee Saturday night and danced the night away. Left Marquee at 3:30am to have breakfast and was in bed by 5am. By my calculations - that means I was up for 24 hrs minus the 2 hr nap on Saturday evening. Sunday was pretty lazy. Natasha and Anne both left that day. Mike and I went down to Fremont Street on Sunday night. Monday, Mike and I travelled the strip and went to a show that night. We left to drive home on Tuesday morning. I learned a good lesson about shoes when I was in Vegas in September 2010, so this time around I wore flats until we got to Marquee, then slipped on my heels for the evening, then put my flats back on for the journey home...excellent lesson learned considering my feet were already torn up from running that morning.
Here's a few more pictures for your enjoyment ->
(Picture by New York New York.) 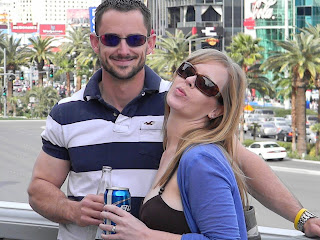 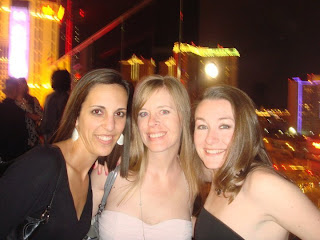 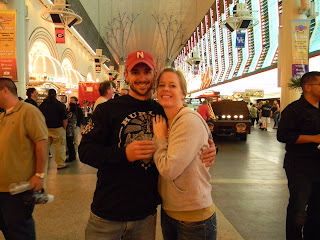 (waiting for the show to start @ Planet Hollywood - Mike sporting his new aviators. :)) 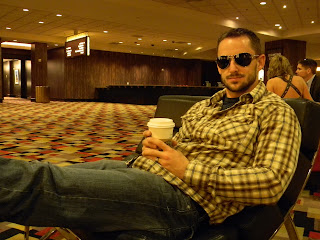 Posted by Mike and Kirsten at 8:26 AM No comments: