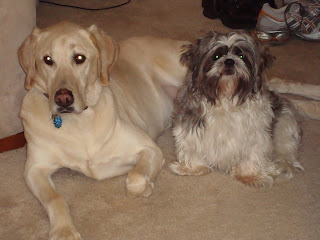 Today is one of our baby's 4th birthday! Happy Birthday Boulevard! We love you!(Even though you do coat everything we own in yellow dog hair!) :)

A few changes will be occurring in our household over the next week or two. Mike will FINALLY be done with field training which means he will be getting a consistent schedule. Yes, you heard me correctly, a consistent schedule! Up until this point, Mike has been changing schedules and stations every two weeks. I know he really wants to work nights on Sat, Sun, Mon, and every other Tues(night pay and Sunday pay) but I secretly hope he gets nights on Wed, Thurs, Fri, and every other Tues, just for the fact that it will work with my schedule better. Which leads to my changes... I will have cheerleading/poms every Wednesday, volleyball practice on Thursday's, and volleyball games on Friday's. So you see why I selfishly want him to work on the same nights I have all of those things...then we can spend time together on his days off.
I had Book & Cook club yesterday and I'm still loving that. One of our March meetups is to go to a restaurant and the chef is going to teach us to make a couple Indian dishes. It's a little pricey so I'm not sure I'm going to go but really want to. I'm also going to see Ani Defranco at the 9:30 Club(http://www.930.com/) in D.C. on March 6th with a few girls. I'm looking forward to it as long as someone else drives me. :)
Posted by Mike and Kirsten at 3:49 PM 1 comment:

I slept horrible last night because I've come down with this 'runny nose-scratchy throat-headache-clogged ears-can't breath' yuckiness. I guess the good thing is that it's not the flu or anything, just a yucky cold. THEN after having a horrible night's sleep, I hear Stuart jump off the bed and start gagging like he's going to throw up. He has this weird throw-up thing that happens every so often and he'll gag about 7 times and then throw up.(but it's been discussed with the vet and there is no major concern since it happens so infrequently) Anyway, I launch myself out of bed and grab him and run to the bathroom so he can throw up on the linoleum. Much easier to clean than the carpet. So, I got that all cleaned up, walk down the stairs and another unknown subject(well it had to be Mike or Boulevard...so I'm guessing it was Boulevard) had thrown up twice at the bottom of the stairs. Yuck...I got to clean up two dogs' puke this morning.
So, it's really just been an all around yucky day! Not to mention the snow/sleet/rain stuff that we've been having all day. Thank goodness I don't have to commute to work.
I didn't have any meetings today for work so I didn't have to expose what I have left of a voice to any of the people I work with. I have a meeting packed day tomorrow so hopefully my voice will make it through the entire day.
Posted by Mike and Kirsten at 2:44 PM 1 comment:

Mike and I are laying pretty low today...nothing too exciting planned. We went out for dinner last night for Valentine's Day since he has to work early tomorrow morning. We went to the Olive Garden--yummy!
I had my first volleyball 'practice' on Thursday night. It went pretty good. I'm going to start playing on the team next Friday and I'm looking forward to it. I really miss playing with my Nebraska people but it's nice to be playing again.
I have a 5-mile run scheduled for today...and I'm going to run it on the treadmill. There are not consistent sidewalks out here so I'm always afraid I'm going to run out of sidewalk and not know where to go next. I need to map out some routes and then drive them to make sure there is always sidewalk. I'm currently planning on running the Marine Corp half marathon on May 17th...I haven't officially registered yet but hopefully I'll stay on the running wagon so I feel confident enough to regiser.
Hope everyone has a love-filled Valentine's Day!
Posted by Mike and Kirsten at 9:22 AM 2 comments:

I took the day off yesterday and we went to the D.C Auto Show...a huge convention center FULL of cars of all different makes and models. The first thing I notice - all the cool cars. The second thing I notice - that there are gorgeous women(in black dresses and stiletto heels) speaking about and trying to sell these cars. The third thing I notice - that the majority of auto show attendees are male. Light bulb goes on...too funny...so they have hot women talking about cars that men typically care about the most?! Unbelievable marketing strategy! Then we even read in the Washington Post an article where they discuss the women so I'm not the only one that noticed. :)
The car show was pretty cool actually. I've never heard "I would love to have this" out of Mike's mouth so many times. AND I never knew that he had such a plethora of auto knowledge.

Well we had some drama last night in our apartment parking lot about 100 feet away from our front door. Yasser(our friend that we were going out with last night) was picking us up and we were walking to the parking lot. Mike, of course, saw the police lights first. I said, "What's happening?"...like Mike is supposed to know more than I do at this point. We get closer and see that it is an un-marked police car right behind a parked car and he is asking us where he is. Like typical cops, Yasser and Mike head over to talk to the police officer as I jump in the truck ready to lock the doors at any moment, hop in the driver's seat and run someone over if needed. :) But I did not need to do this. So, Yasser comes over and let's me know that Mike and him are going to stick around until the officer gets his back-up. He tells me that the car the officer is parked behind is stolen. Finally the officer's back-up arrives(4 additional police cruisers I believe) and a police dog. One at a time, the four people in the stolen car get out of the car and walk back-wards toward the police car, get hand-cuffed, patted down, and put in a police car...this all happening as the police dog(pretty sure it was a shephard) was barking his brains out right behind them as they get out of the car. I'd be scared too, not to mention the 5 guns that are readily available to be used from each of the officers. Mike and Yasser finally came back to truck and we left to enjoy our evening out.
To ease all your concerned minds...the good news here is that it was completely random that this car ended up in our parking lot. The people had no connection to our apartment complex. Furthermore, I think it's probably a good sign that the officer didn't know where he was...that means he doesn't come here often, if ever.
Thank heavens for law enforcement!
Posted by Mike and Kirsten at 7:29 AM No comments:

Lunch time for Kirsten so I log in and catch up on Facebook and the blog. I have a funny story to share...Yesterday Mike and I were in Target picking up a few things after we got done at the gym. I wasn't sure what we were there to get but Mike seemed to know. Anyway, we're are walking past the shampoo/lotion/medicine section and Mike and I had a funny conversation:

Mike said, "We need to get the zapper thing."
Kirsten said, "What does that mean?" The only zapper thing that I am familiar with is the ninetendo wii zapper which he got for Christmas.
Mike said, "You know the zapper thing" and he proceeds to imitate shooting a hand gun(or at least that's what I interpreted it as)
I stared at him indicating I need a little more info...
I said, "Do you mean the gift registry zapper?"
Mike said, "Yes!!"

This is considered a zapper? Well whatever but I'm pretty sure I will need to monitor his zapping or he may just zap the whole store. Yikes!
Posted by Mike and Kirsten at 9:38 AM 2 comments: 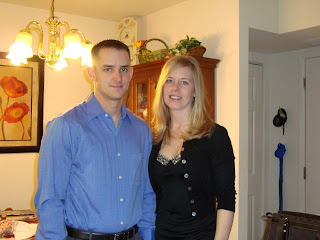 Today is Mike's 27th birthday! This is one of my favorite days of each year because Mike and I are the same age for the next 3 months. If you only knew how much he torments me about how old I am and that I'm older than he is, you would understand why this is one of my favorite days of the year. :) HAPPY BIRTHDAY MIKE! Since Mike has to work today, we went out this past Friday to Victoria's Gastro Pub (http://www.victoriagastropub.com/) it was an amazing place to eat. For any future visitors to the our household, we will defnitely need to go there to eat. Very cool place! :)
Besides Mike's very special birthday, today was "happy haircut" day for me. I found an amazing hair place that I will definitely continue to go to. The before pic is above and here is the after pic. 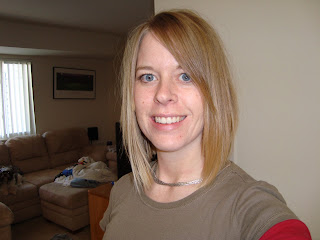